Derluguian: Turkey brought Karabakh, that  had remained dormant in the shadow of Russia, from the backyard to the forefront of  the international agenda 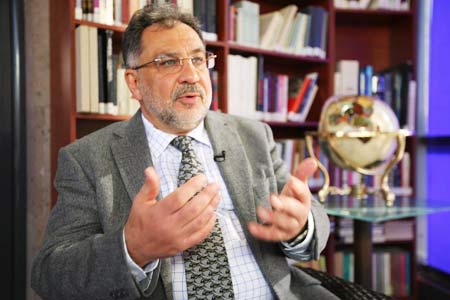 ArmInfo.Based on my detailed analysis of the situation around Artsakh, and based on assessments of the historical prerequisites for last year's war, we have to state  that it is geopolitics that gives uncertainty to the prospects for  the second stage of the 44-day war. Historical sociologist,   professor of the New York University at Abu Dhabi, Georgi M.  Derluguian  expressed a similar opinion  to ArmInfo.

"It seems that the last year's armed confrontation in Artsakh has  distinct geopolitical contours, if you like, a component. This allows  us to assess last year's events over 44 days as a kind of mini, but  world war. And based on this, we can assume that only the first part  of this very real world war took place in the fall of last year.  And  the geopolitical situation resulting from this turned out to be so  complicated that we can only guess whether the second stage will  follow and how soon it can happen, "he stressed.  According to the  professor, despite the fact that the tactical details of the recent  second Karabakh war are still a matter of conjecture for the expert  community as a whole, it seems that Turkish generals were in charge  of the fighting in the Azerbaijani army. And at the moment when the  fall of Shushi threatened the complete elimination of the Armenian  forces in Artsakh, Russian President Putin entered the game. The  latter actually forced Aliyev to stop the offensive, forcing  Pashinyan to sign a surrender. However, how long the situation   formed as a result of such coercion can last, in which Armenia and  Artsakh are connected only by a corridor 5 kilometers wide, apart  from a question mark, does not cause any other associations.

This current situation around Artsakh, according to Derluguian, is  largely derived from the inaccurate and not calculated until the end  of the implementation of the Eurasian policy. Recalling that in 1991  Moscow could only indulge in dreams of the return of geopolitical  influence in the context of the US hegemony in the current world  order, the professor emphasized that the new capitalist Russia with  its sphere of influence was to be formed precisely in these  conditions.

The ideal way out of the situation, in Derluguian 's opinion, could  be the so-called controlled conflict between Russia and the United  States, including through the creation of a buffer space for China in  the center of Eurasia. Monopolarity could have turned out to be an  impeccable option, but everything was spoiled by the sloppy  implementation of Eurasian geopolitics. As a result, today the world  is faced with the consequences of such inaccuracy in Chechnya,  Ukraine, and now in Belarus and Artsakh. The essence of what is  happening, in his opinion, rests on the reform of the Russian army  after the war on 08/08/08, the results of which the same world  clearly saw in 2014 in the form of the lightning return of Crimea and  Sevastopol "to their native harbor."

"Than more- more. After reunification with Crimea, Russia did not  allow the victory of the Islamists in Syria. But here Putin already  had to face Erdogan, the collector of Ottoman lands. And it was the  incessant Turkish attempts to achieve a military-political revenge on  the lands that were once part of the Ottoman Empire that again brought  Nagorno-Karabakh, that had remained dormant in the shadow of Russia,  from the backyard to the forefront of the international agenda. And  it is absolutely impossible to say today how all this will end  tomorrow," Derluguian summed up.