Poll: Credit of trust in the "Civil Contract" party is gradually  decreasing 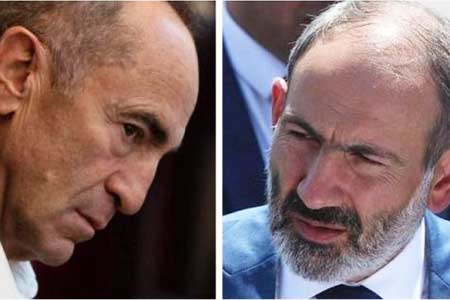 ArmInfo. Credit of trust to acting Prime Minister Nikol Pashinyan's "Civil Contract" party is  gradually decreasing. This is evidenced by the results of a survey by  the MPG (Marketing Professional Group) consulting company, which  represents the Gallup International Association in Armenia.

In particular, according to the results of the survey, from February  this year to June this year, the number of respondents who are ready  to vote in the upcoming parliamentary elections for the "Civil  Contract" dropped from 33.1% to 24.1%.

The opposite situation is observed in relation to the "Armenia"   party of second President of the Republic of Armenia Robert Kocharian  for which 23.8% of respondents are ready to vote at the beginning of  June, whereas in February this figure was 7.8%. The "I Have the  Honor" bloc had a sharp increase in votes, from 1.6% in February of  this year, to 7.4% in June this year.

No significant changes were registered in the dynamics of votes for  the Prosperous Armenia Party (from 4.4% to 3.7%) and  party (from 2.6% to 3.1%).  According to the poll, the  majority of respondents are still ready to take part in the upcoming  early parliamentary elections. In particular, 53.9% expressed their  full readiness to participate in the elections, while 22.7% are not  going to vote, 10.3% are more likely yes than no, 12.8% are more  likely than not.

In the regions of Armenia, the situation is as follows: 25.9% of  residents of other cities of the Republic of Armenia expressed a  desire to vote for the "Armenia" party, 24.1% - "Civil Contract",  7.9% - "I Have the Honor", 3.8% - PAP, 4.1% - ,  2.5% - . At the same time, the "Armenia" party party has  the maximum support in the capital, for which 27.5% of respondents  are ready to vote, 16.2% of respondents will vote for "Civil  Contract" in Yerevan, for "I Have the Honor" - 9.3%, for "Lusavor  Hayastan "- 3.7%, while "Republic" and the PAP each won 2.1% of the  vote. At the same time, the highest assessment (on a 5-point scale)  by the public was given to the political activities of Ombudsman of  Armenia Arman Tatoyan (3.8), followed by RA acting Prime Minister  Nikol Pashinyan (2.5), the second RA President Robert Kocharian and  RA acting President Armen Sarkissian received an equal rating (2.3  each), the activities of the PAP leader Gagik Tsarukyan were rated  2.1 points, third RA President Serzh Sargsyan , leader of the  "Republic" party Aram Sargsyan and  leader of the "Bright Armenia"  party received 1.8 points each,  first president of Armenia Levon  Ter-Petrosyan was awarded 1.6 points, the least number of points went  to  leader of the "I Have the  Honor" bloc Artur Vanetsyan. At the  same time, 61.7% of respondents believe that the situation in Armenia  is extremely tense, 3.5% of respondents hold the opposite opinion,  26.6% - rather tense, and 7.3% - rather not tense, 0.8% - found it  difficult with the answer. Due to the fact that the number of  high-profile criminal cases involving the use of firearms has  recently increased in Armenia, 27.2% of respondents assess the work  of the RA Police negatively, 23.4% - rather negatively than  positively, 24.3% - rather positively than negative, 19% - extremely  positive, 6.1% - found it difficult to answer. To note, the survey  was conducted through telephone calls to residents of Armenia in the  period from June 7 to 10 this year, the sample size was 1103, the  sampling error was +/- 3.5%.