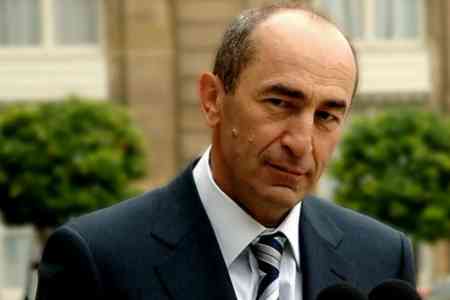 ArmInfo.  Second president of Armenia, head of the "Armenia" pre-election bloc Robert Kocharian sees the road to a dignified peace for Armenia exclusively through negotiated diplomatic methods, returning the negotiation process to the field of the  international principle of the right of nations to  self-determination.

Speaking at a press conference today, Kocharian noted that it is not  about of resuming military decisions, not because the country is in a  wrong state, but because it is generally wrong to talk about military  solutions. The point is to return the issue to the field of the right  to self-determination and to try to achieve certain successes by  diplomatic means through the negotiation process. <This work will  have to start from a very difficult starting point, but I see  opportunities. I can't talk about 100% success or the top of these  opportunities. But at the same time I see that the current  authorities not only do not think about it at all, but in this matter  they are showing complete hopelessness, and therefore it is  impossible to connect any hopes with the authorities, "Kocharyan  said.

The second president did not comment on the accusations against the  first president, Levon Ter-Petrosyan, of an uncompromising position  on Artsakh. I was the President of Armenia for 10 years, and there  was not a single proposal from the co-chairs (OSCE MG, Ed. note),  that Azerbaijan would agree to, and which Armenia would have  dismissed, and this is a fact. With regard to all the proposals, we,  albeit with some reservations, talked about the possibility of  discussing them. Azerbaijan unambiguously refused and this is the  best answer to the accusations of the first president against me,"  Kocharian noted. He stressed his disagreement with Ter-Petrosyan and  that the key to the solution of the Karabakh problem lies with the  Russian side. Kocharian expressed his conviction in the incorrectness  of this approach, since this simply cannot be:  there are parties to  the conflict, there are those who are involved in it and there is an  institution of co-chairs. It is clear that Russia is a key country  playing an important role in this process, in this region, but to  think that the key is in only one place does not correspond to  reality.

Kocharian refused to comment on the third Trilateral Statement on the  establishment of the Commission on the delimitation and demarcation  of borders between Armenia and Azerbaijan, which is being prepared  for signing, as it is at the stage of discussion, did not accept the  final version, and may be revised. Moreover, Kocharian does not  consider it right to get involved in this agenda, since the bloc has  a lot of other pre- election work.

Kocharian, however, did not comment on whether he could have  influenced the conclusion of a new trilateral statement, which talks  about the delimitation of the borders between Armenia and Azerbaijan  and whether he agrees with Pashinyan's position, who believes that  the document is in the interests Armenia of 100%. Kocharian only  stressed that there have been many such statements "about the  interests of Armenia" in recent years, but for some reason there have  never been these 100% coincidences. "Then we can already ask why, in  this case, we found ourselves in such a sad situation. I can say with  responsibility that during these three years not a single step has  been taken that would proceed from the interests of the Republic of  Armenia, especially from the point of view of ensuring its security,  resolving the conflict or in the field of economic reforms. Nothing  has been done in any area, "said the head of the <Armenia> electoral  bloc.

Answering the question of how justified it is to hold elections when  the enemy crossed the country's borders and is there no other choice,  and why in such circumstances all the opposition forces did not unite  into one bloc, Kocharian noted that if the entire opposition united  into one force and went if together for the elections, would the  citizens not have a question, how then to work and how to govern the  country. "Then people would have the right to believe that our goal  is to throw one person off, and not solve the country's problems. The  format must be functional. And I cannot imagine the effectiveness of  such a broad opposition format. We go to the elections to win and of  course we think about how we will keep our promises and how to  correct the situation," Kocharian said.