Armenia began the process in CSTO, addressed letter to Russia, and  France declared its readiness to provide military support to Armenia 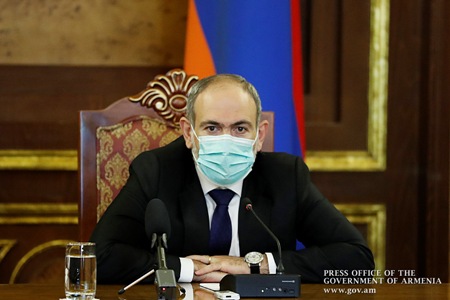 ArmInfo. Armenia has begun the process in Collective Security Treaty, and France is ready to provide military support to Armenia within the framework of the UN mandate and is ready to raise the issue of Azerbaijan's illegal actions in the UN Security Council.

Prime Minister of Armenia Nikol Pashinyan, speaking at an  extraordinary session of the parliament, stated this presenting to  the MPs the situation that has arisen in connection with the passage  of the Azerbaijani armed forces across the sovereign border of  Armenia.

According to Pashinyan, the armed forces of Armenia, thanks to  certain actions, managed to stop the enemy's movement without using  fire, but they took some positions on the territory of Sev Lich  (Black Lake) at a distance of 3 km inside the sovereign territory.

According to Pashinyan, an analysis of the situation showed that this  is not a local, but a far-reaching provocation, taking into account  the fact that Sev Lich is located on the narrowest between Azerbaijan  and Nakhichevan and furthermore, taking into account the upcoming  military exercises in Azerbaijan with the participation of 15  thousand troops on May 16. The goal of Azerbaijan became clear - this  is not a local action, but an attempt to unleash a war to open a  corridor, which Aliyev said more than once in the absence of  demarcation lines and delimitation of borders between countries. The  enemy side is trying to justify its presence with falsified cards.  But even Soviet maps show a completely different situation, which the  Azerbaijani side itself is well aware of.

According to Pashinyan, in this regard, it was decided not to fall  into the trap of provocation of a big war and to use  military-political security mechanisms within the CSTO, involving  international bodies and the community in the process. According to  Pashinyan, he did not address Russia directly yesterday, since the  positions of the parties are unambiguous and the President of the  Russian Federation also believes that the armed forces of Azerbaijan  should return to the borders of their country, and furthermore, an  agreement was reached yesterday evening that today the troops should  have be withdrawn. This was partially done, but only partially. But  in fact, the agreement was not implemented. Therefore, today  Pashinyan wrote a letter to the President of Russia for assistance,  including military one, within the framework of the interstate  Agreement on Friendship, Cooperation and Mutual Assistance of 1997  and the agreement on the mutual grouping of troops.

Pashinyan also noted that despite the absence of diplomatic relations  between Armenia and Azerbaijan, it is possible and necessary in  today's conditions to demarcate and delimit borders and deploy border  troops on the border, withdrawing the armed forces to places of  permanent deployment. This means that there will be a border, a  certain idea of the border, which will mean a completely different  military-political situation.