MP from ruling faction: If the negotiations fail, the Armenian side  will have to take other measures 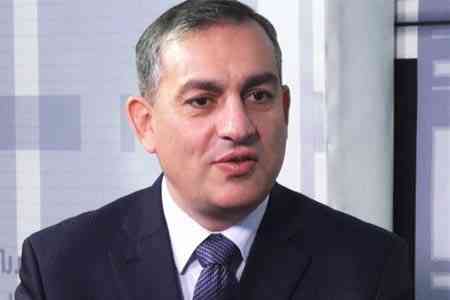 ArmInfo.MP from the ruling faction "My Step" of the parliament of the seventh convocation Armen Khachatryan hopes that the negotiations with the Azerbaijani side  will end with unquestioning fulfillment of the demands of the  Armenian side. He stated this on May 14 in an interview with  reporters.

According to Khachatryan, negotiations are being conducted around the  withdrawal of the Azerbaijani military from the territories not only  of the Syunik region, but also of Gegharkunik.  The negotiations are  attended by: Acting Deputy Head of the Ministry of Defense, Deputy  Chief of the General Staff of the RA Armed Forces, commanders of  military corps from the Armenian side, a representative of the  Russian Federation and the Azerbaijani Armed Forces.  The MP ruled  out the possibility of an "exchange" - the concession of another  territory, in exchange for the territory occupied by the Azerbaijani  armed forces around Sev Lich (Black Lake). He also touched upon the  possibility of establishing a neutral zone between Armenia and  Azerbaijan on the territory of Sev Lich.  In his words, the idea can  be justified if it is realized not only at the expense of the  territory of Armenia.

At the same time, as Khachatryan stressed, if the negotiations are  ineffectual, the Armenian side will be forced to take other measures.  "Within the framework of the CSTO, the Azerbaijani armed forces, with  the use of force, should be expelled from the territory of Armenia,"  he said, stressing that all the consequences were taken into account  by the military-political leadership of the RA.

Earlier, in an interview with reporters, acting Deputy Prime Minister  Tigran Avinyan stated that Armenia is inclined towards peace  negotiations, but if they do not yield results, one must be prepared  for a bad development of events and the protection of the sovereign  territory of Armenia.