Armenia made a decision to apply to the CSTO 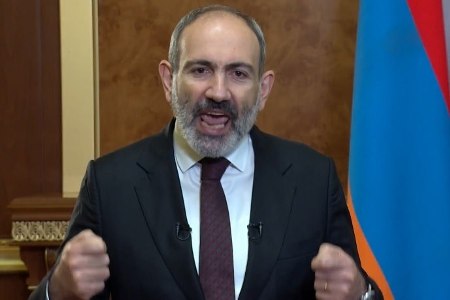 ArmInfo. Armenia made a decision to apply to the Collective Security Treaty Organization (CSTO), Acting Prime Minister Nikol Pashinyan stated on May 13 at the meeting of the  RA Security Council.

Pashinyan recalled that it is already the second day the situation  around the Syunik Lake Sevlich (Black Lake ed. note) and the  surrounding areas remains tense. The reason is that, as explained by  the acting head of government, certain groups of Azerbaijani military  personnel crossed the state border of Armenia in order to seize Lake  Sevlich. The Armenian Armed Forces carried out tactical  counter-actions, as a result, the enemy's Armed Forces retreated from  adjacent occupied territories. At the same time, as Pashinyan  stressed, without the use of weapons.

Nevertheless, about 250 servicemen of the Armed Forces of Azerbaijan  continue to remain on the territory of Armenia in certain areas of  Syunik and Gegharkunik. "With a comprehensive and in-depth analysis  of the current situation, it becomes obvious that the actions of the  Azerbaijani servicemen were a provocation with far-reaching  military-political consequences. I mean that, perhaps, the  Azerbaijani military crossed the state border not in order to resolve  territorial issues, but to provoke armed clashes" ,  he said.

This, according to Pashinyan, is evidenced by the following factors:  they try to justify their presence with frankly fake maps, stating  that in fact this is the territory of Azerbaijan. Meanwhile, the maps  of Soviet times, according to acting Prime Minister, refute the  validity of these statements, which, however, the Azerbaijani  servicemen themselves know. The second factor, which speaks of the  provocative nature of the actions of the Azerbaijani Armed Forces, is  that on the day of the start of the provocation, Baku announced plans  to conduct large-scale military exercises on May 16 with the  participation of 15 thousand military.  The last factor, as Pashinyan  noted, is that at the end of April, the President of Azerbaijan made  open threats to the territorial integrity of Armenia. "Then he  threatened to open the so-called" Zangezur corridor "between  Azerbaijan and Nakhichevan with the use of force," Pashinyan  recalled.

"Our assessment is unambiguous - the current situation fully complies  with the provisions of Article 2, paragraph 2 of the Collective  Security Treaty, which states that" In the event of a threat to  security, stability, territorial integrity and sovereignty of one or  more participating states or a threat to international peace and  state security- the participants immediately put into action the  mechanism of joint consultations in order to coordinate their  positions, develop and take measures to provide assistance to such  participating states in order to eliminate the threat that has  arisen, "said the acting head of the Armenian government.

Based on the above, Nikol Pashinyan instructed the acting heads of  the Foreign Ministry, Defense Ministry and the Secretary of the  Security Council of Armenia to take the necessary measures towards  the start of the consultations provided for by the Collective  Security Treaty. It was also instructed to start actions in order to  initiate the appropriate procedures provided for by the CSTO  regulations in crisis situations.  Yesterday at the morning, the  Azerbaijani Armed Forces crossed the state border of Armenia and went  3.5 km deeper. During an emergency night meeting of the Security  Council of Armenia, Pashinyan called this an unacceptable  encroachment on Armenia's sovereignty.

Today Pashinyan hastened to note that it did not come to a military  escalation - there were no shootings and clashes. "Since yesterday  work is underway to expel Azerbaijani servicemen from the territory,  "he said.  As noted by the acting head of the RA government, what  happened yesterday in Syunik is a prepared provocation. "The  Azerbaijanis had with them clearly falsified maps with the help of  which they claim that they are within the borders of Azerbaijan. we  are dealing with an organized provocation, "- explained Pashinn.

According to Pashinyan, the most important issue is how the  servicemen of the Azerbaijani Armed Forces were able to cross the  state border of Armenia and pass through the interpositional  territories, reaching Lake Sevlich. This aspect, as he noted,  requires separate consideration.

He also touched upon the fact that yesterday, all day, the Defense  Ministry and the National Security Service (NSS) denied the  information for the simple reason that they denied misinformation  exaggerated in connection with the alleged hostilities and injuries  of servicemen.

Pashinyan urged to take the situation extremely seriously, since it  has a number of development scenarios.  "Our task is to ensure the  inviolability of Armenia's sovereignty and force the forces of the  Azerbaijani Armed Forces to return to their original positions as of  May 10. Work is underway on the spot," he said.  According to the  acting Prime Minister, today after the meeting of the Cabinet of  Ministers, a meeting of the RA Security Council will be held, during  which the current situation will be discussed in detail and the  necessary decisions will be taken for further control of the  situation. According to him, in order to resolve the situation, it is  necessary to act prudently, in principle, decisively and together.