Lavrov and Aivazian discussed  situation in Syunik region of Armenia 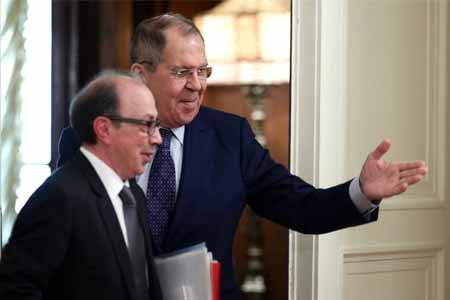 ArmInfo. Acting Foreign Minister of Armenia Ara Aivazian held a telephone conversation with his Russian counterpart Sergey Lavrov.  As reported by the press service  of the RA MFA, the acting Minister of Foreign Affairs of Armenia  informed his counterpart about the recent incident on the state  border of Armenia and noted that such provocations from the  Azerbaijani side are could not be allowed.

They mutually noted the importance of the full implementation of the  agreements reached on regional security and stability and the  coordination of steps to prevent an aggravation of the situation.   Earlier, information was spread in the Armenian media that the  Azerbaijani Armed Forces launched an offensive in the direction of  the Ishkhanasar village of the Syunik region of the Republic of  Armenia.  Allegedly, intense fighting is going on now, and there are  wounded among the Armenian side. It is also reported that the enemy  advanced 3 km deep into the Syunik region of Armenia and the  municipal authorities of the Syunik region of Armenia also confirm  this information.

Meanwhile, the Armenian Defense Ministry assured that the information  spread in the press "about the battles in the direction of  Ishkhanasar" does not correspond to reality. At the same time, they  confirmed that the Armed Forces of Azerbaijan, today, on May 12,  under the pretext of "clarifying the borders" tried to carry out  certain activities in one of the border regions of Syunik. "After the  measures taken by the Armenian units, the Azerbaijani military  stopped these works. At the moment, negotiations are underway to  resolve the situation," the RA Defense Ministry stressed.