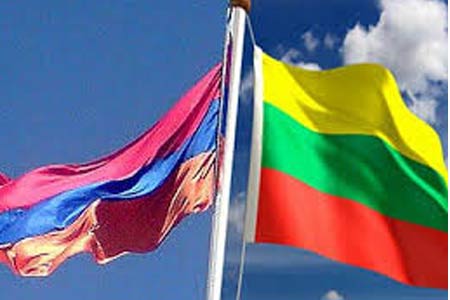 ArmInfo. Within the frameworks of the official visit to the Republic of Lithuania the Delegation led by the Speaker of the RA National Assembly met with Speaker of  the Seimas of Lithuania Viktorija Cmilyte-Nielsen and the Lithuanian  parliamentarians.

As the press service of the RA NA reports, welcoming the Speaker of  the National Assembly, the Speaker of the Parliament of Lithuania has  noted that she hosts with great joy the Armenian Delegation,  underlining that this year marks the 30th anniversary of the  establishment of the diplomatic relations between Armenia and  Lithuania. Viktorija Cmilyte-Nielsen highly assessed the bilateral  relations formed between the two countries during these years and  underlined the role of the active cooperation between the two  parliaments and, particularly between the parliamentary Friendship  Groups.

Thanking his colleague for the invitation, Ararat Mirzoyan has noted  that the two countries have a great scope of dialogue which is based  on democratic values. The Speaker of the Parliament of Armenia highly  evaluated the support of Lithuania to Armenia in the fight against  the pandemic and expressed his gratitude to the Lithuanian side for  the recognition of the Armenian Genocide, as well as for the  participation of Lithuania at high level in the ceremonies to the  memory of the Armenian Genocide victims this year.

Touching upon the situation existing around the Nagorno Karabakh,  Ararat Mirzoyan has noted that Azerbaijan continues grossly violating  the November 9 tripartite statement, refusing to return the Armenian  prisoners of war and other detained persons. In addition to that, the  authorities of Azerbaijan continue its policy of Armenophobia, which  once again proves that the Artsakh Armenians cannot live safely being  part of that country in any case.

The Speaker of the Seimas has stated that Lithuania continues  expressing anxiety over the encroachments towards the return process  of the prisoners of war, as well as the Armenian cultural heritage by  Azerbaijan.

During the meeting the sides discussed a number of issues of  bilateral interest, and among them Ararat Mirzoyan informed his  colleagues about the snap parliamentary elections being expected in  Armenia and invited her to implement observation mission in Armenia  in those days.