Pashinyan: Turkey returned to the region 100 years later to continue  its genocidal policy 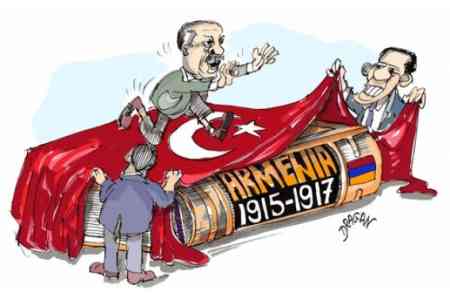 ArmInfo. Turkey returned to the region 100 years later to continue its genocidal policy. This was announced on April 10 from the rostrum of parliament by the acting  Prime Minister of Armenia Nikol Pashinyan answering the question of  the lawmaker related to US recognition of the Armenian Genocide in  the Ottoman Empire.

He recalled that earlier, referring to this issue, he noted that 4  factors influenced this step of the United States - one long-term,  one medium-term and two short-term.

At the same time, among the short-term factors, Pashinyan noted the  44-day war in Karabakh, and the direct involvement of Turkey in it.  "In almost all my interviews with international media, I noted that  Turkey returned to the region 100 years later to continue its  genocidal policy. And naturally, in this context, of course, the  issue of genocide and the 44-day war were connected with each other,"  said acting Prime Minister of the Republic of Armenia, also recalling  the formula "remedial secession ", which he also repeatedly mentioned  during the war in his interviews.

Pashinyan stressed that in the context of the Karabakh issue, this  formula is increasingly mentioned.