The incumbent government is an obstacle to building a modern and  strong state. We will remove this obstacle: Vahe Hakobyan 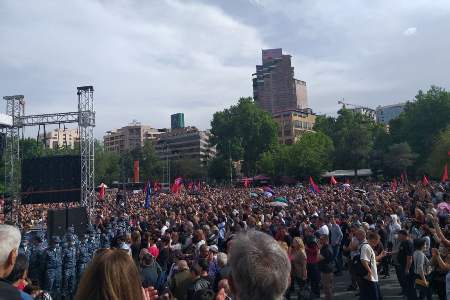 ArmInfo."We are faced with a choice - to preserve or not to preserve the State," said Ishkhan Saghatelyan, a member of the ARF Dashnaktsutyun Supreme Body on May  9, speaking at Freedom Square in Yerevan.

As Saghatelyan stated, the current government, as the embodiment of  evil and a symbol of defeat, must leave. According to him, they are  fighting not for power, but against lies and mob rule, in the name of  a worthy future of the Armenian nation.

According to the ARF member, today Armenia is at the point of  bifurcation and is going through one of the most fateful moments of  its existence. "We do not promise you miracles, but we promise to  lead the country out of this situation and build a strong Armenia by  daily work. We have already done this together with Robert  Kocharian," he said.