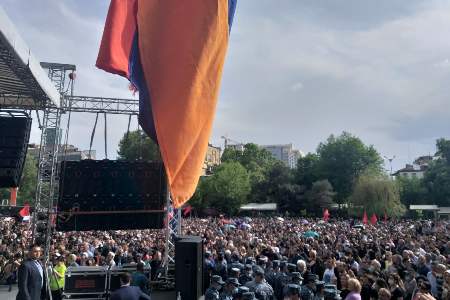 ArmInfo.Armenia today faces extremely complex challenges, mainly related to security issues, and it depends only on its choice whether the Republic of Armenia will  continue its existence as a subject of international law, or become  someone's appendage.

Second President Robert Kocharian stated this on  May 9, speaking at Freedom Square in Yerevan.  As the head of the  electoral bloc pointed out, he structured his speech in the format of  questions and answers. He began with the question "Why me?" According  to Kocharian, he has extensive experience in crisis management,  skills in working in the field of security and overcoming the  economic crisis.

"Why ARF?" Kocharian asked. In addition to the fact that the second  president, in his words, has many years of experience of cooperation  with the Dashnaktsutyun, it is also important that the ARF  Dashnaktsutyun is a party that has fought and is struggling to  preserve the Armenian identity.

"Why" Reviving Armenia? "- since the party originated in Syunik and  is spreading throughout the republic, since all the vital challenges  have accumulated around Syunik today and it depends on Syunik whether  the Republic of Armenia will continue to exist as a subject of  international law, or become someone's appendage. Syunik is a symbol  of our struggle, "Kocharian explained.  "Why should the incumbent  government leave?" Kocharian asked. The incumbent government,  according to the second president, symbolizes "the voice and face of  defeat." With this face and voice, as he pointed out, Armenia cannot  move forward, and the people with such a stigma on their foreheads  are not able to build their future. "The authorities are to blame for  the death of 5,000 and the injury of 10,000 people, 35,000 of our  compatriots were left homeless. It bears death and destroys  everything it touches," Kocharian said.

According to the second president, as long as the Pashinyan  government is functioning, it will be "accompanied by suspicions of  betrayal and the sale of Artsakh." And the consequent destruction of  the economy has led to the fact that today Armenia, instead of the  promised take-off growth, has the same "take-off recession". "Under  this government, for three years, growth was recorded only in the  number of graves and poverty," he said.

Concerning plans for the future, Kocharian answered the question,  "What are we going to do next?" As the second president noted, first  it is necessary to make an inventory of the damage done to the state  in all fields. In his words, it is necessary to immediately stop the  further degradation of the state administration system, increase the  authority of Armenia in the international arena and regain the good  name of a reliable partner. Armenia, as he noted, will develop the  economy, which will be based on science, will abandon the total lie,  which today is saturated with the entire state system and "unpleasant  scenes" of laying on the pavement. "

"This is an incomplete list of all that we promise to fulfill. And we  promise only what we can bring to life," the leader of the Bloc  assured. As Kocharian assured, they will build a country that every  Armenian will be proud of. "We, we have friends and allies, but no  one will develop and build our country instead of us. Our fate is in  our hands," Robert Kocharian concluded.

Note that this was Kocharian's first rally after the announcement of  his return to politics. As ArmInfo previously reported, the ARF  "Dashnaktsutyun" and "Reviving Armenia" parties on May 6 announced  their participation in the early parliamentary elections in a single  bloc, the electoral list of which will be headed by the second  president of Armenia Robert Kocharian.