Border guard: Russia may be asked to mediate in the issue of  clarifying the borders between Armenia and Azerbaijan 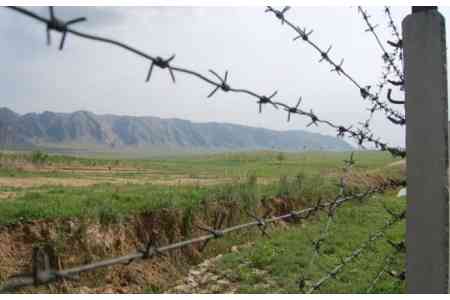 ArmInfo. In Armenia, after November 9, a new border was formed from the banks of the Araks to the Vardenis Sotk, which did not exist before. Former Commander of  NSS Border Guard Troops Major-General Armen Abrahamyan said this  during a press conference on May 7, adding that a new border had been  formed over several hundred kilometers.

"This border has not yet been clarified and we cannot say how much of  29 thousand square kilometers is left. What is happening today at the  border is wrong. You have probably heard several times from the  country's leadership and authorities that the military is demarcating  the border. But demarcation is not done the way it should be done,  "Abrahamyan said, recalling that an interstate commission should be  formed to carry out work on demarcation and delimitation, which will  be supervised by the Foreign Ministry, since this is primarily  diplomatic work.

He pointed out the need for specialists from the Institute of Geodesy  to participate in this process, which, as you know, was recently  abolished. At the same time, Abrahamyan called it a mistake to  entrust this process to the military. According to him, entrusting  this process to armed people from both sides can lead to  unpredictable consequences. "This is such an important issue that you  cannot entrust it to the military. This should be the responsibility  of the state," he said.  Touching upon the issue of determining the  boundaries by means of GPS systems, Abrahamyan noted that there are  precise geodesy devices that carry out this difficult work.  "I will  give a small example: work on the demarcation of the border with  Georgia began in 1996, and 25 years have passed, but this work has  not yet been completed. I can say the same about the Georgian-  Azerbaijani border. When it is announced that demarcation work will  be carried out in Syunik region, this is an unprofessional approach,  "Abrahamyan said.

At the same time, the former NSS Border Guard Troops Commander called  it impossible to carry out demarcation work with Azerbaijanis in  today's conditions, given the relations between the two countries.   However, according to him, this work can be done if there is an  intermediary state.  "Russia was a mediator in ending the war. Russia  may be asked to mediate in the issue of clarifying the borders. I do  not see any other possibilities. If we want to carry out demarcation,  delimitation, relieve border tension, the only way out is mediated  work," Abrahamyan summed up.