Russian Foreign Minister urged not to politicize the process around  Karabakh 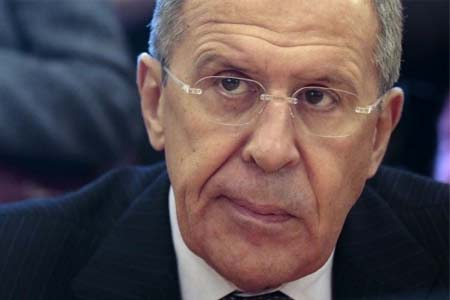 ArmInfo. The peace process, which was launched on November 9, 2020 by reaching an agreement to stop the war and move on to a peacekeeping operation, move on to unblocking all economic ties in the region, all transport communications, has  been underway for almost six months.

Russian Foreign Minister Sergey Lavrov said this on May 6 at a joint press conference in Yerevan following talks with his Armenian counterpart Ara Aivazian, answering  ArmInfo's question about the prospects for resuming the peace process  under the auspices of the OSCE Minsk Group.

"Therefore, talking about the transition to the peace process is a  bit of a distortion of reality. You mentioned the trilateral group, I  also talked about it today, and my counterpart mentioned it - it is  engaged in the practical solution of those issues that are directly  related to the peace process: When people will come out of the  blockade, the embargo, from those obstacles that were erected within  the framework of international organizations, to develop equal  mutually beneficial cooperation here, and will start to deriving  direct benefits from the advantages that this strategically important  both in the geopolitical and geo- economic sense provides region ",  the Russian minister said.

At the same time, he added that Russia, having played a decisive role  in the course of protracted negotiations between the leaders of the  three countries in stopping hostilities, creating a mechanism for  verifying the ceasefire in the person of the peacekeeping contingent,  is more interested than anyone in ensuring that everything agreed by  the presidents Russia, Azerbaijan and the Prime Minister of Armenia,  was carried out in practice.

At the same time, Lavrov expressed his conviction that the co-chairs,  when they called for the final settlement of everything, have meant  what needs to be done to resolve all these issues.

"We have no doubt that when people begin to feel the benefits of a  peaceful life, from the lifting of all restrictions, sanctions, and  manifestations of the blockade, they will begin to treat the issues  that some of our colleagues are now trying to sharpen and bring them  to the forefront. There is no need to politicize the process now. It  is going on rather difficult, because issues related to the routes of  connecting this region, issues related to ensuring what is now called  "connectedness of regional relations" are being resolved, issues of  the line of contact, delimitation and demarcation of the border are  being resolved, these are practically understandable things that need  to be resolved so that the region breathes freely and begins to live  a peaceful life, "added the head of the Russian Foreign Ministry.

Those who are trying to postpone these issues, and first engage in  political discussions, according to Lavrov, turn the whole process  upside down. "It is much easier to solve political issues when people  began to live normally on earth, Azerbaijanis and Armenians, with  each other, as it was for many, many decades and centuries."  summed  up Lavrov.