Aivazian: The issue of preserving the cultural heritage of Artsakh is  part of the political settlement of the Karabakh conflict 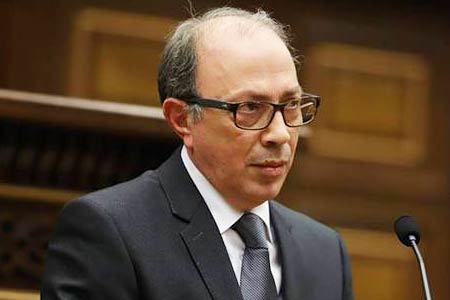 ArmInfo.The issue of preserving the cultural heritage of Artsakh is part of the political settlement of the Nagorno-Karabakh conflict, which the Armenian Foreign Ministry  has repeatedly emphasized. This was announced on May 6 at a joint  press conference with his Russian counterpart Sergey Lavrov by acting  Foreign Minister of the Republic of Armenia Ara Aivazian.

He recalled that on April 13, the OSCE Minsk Group co-chairs in their  statement pointed out the need to protect the cultural and religious  heritage. "We are working closely with UNESCO, expecting that an  assessment mission will visit in the near future. We hope that UNESCO  will take effective steps to implement this mission. The protection  of historical and cultural heritage in general concerns human  rights," the minister said,  calling it no coincidence that the UN  special rapporteurs in early February called on Azerbaijan to  investigate the shelling of the Ghazanchetsots  church in Shushi on  October 8, 2020 and to ensure the participation of representatives of  the Armenian Apostolic Church in the restoration of the church.

At the same time, he added that it is already obvious that Azerbaijan  did not heed the calls of the UN and, moreover, and with unilateral  rude intervention demonstrates disdain. "The Ghazanchetsots church in  Shushi is one of the largest Armenian churches and should remain a  place of religious worship," Ara Aivazian stressed.  Previously,  photographs were posted on the network showing that the Azerbaijanis  dismantled the domes of the Cathedral of Holy Christ the All-Savior  Ghazanchetsots in Shushi.