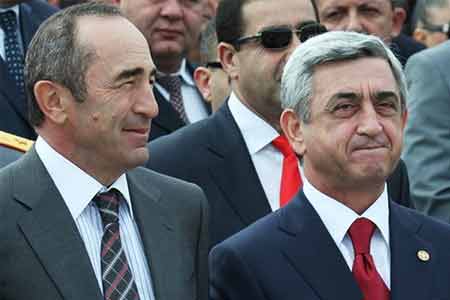 ArmInfo.The offices of the second and third presidents of Armenia responded to the call of the first President of the Republic of Armenia Levon Ter-Petrosyan to  unite efforts against the current government headed by Nikol  Pashinyan.

Thus, head of the office of the second president of Armenia, Viktor  Soghomonyan, noted that they have always opposed the unilateral  disclosure of details of non-public meetings, since it is incorrect,  especially when the narrator of such details distorts their content.

At the same time, Soghomonyan confirmed that on March 25, at the  suggestion of Ter-Petrosyan, a meeting of the former presidents of  Armenia and Artsakh took place.

"Bako Sahakyan told about the proposal to meet with  president  Kocharian, at the same time saying that Ter-Petrosyan had an idea of  joint participation in the early elections.

Kocharian rejected this idea, about which Bako Sahakyan informed  Ter-Petrosyan. The latter, however, suggested that the meeting take  place. And it happened.

During the meeting, there really was no discussion, since Robert  Kocharian again rejected the proposal, motivating it with moral  considerations, stating that in the event of early elections he  intends to participate in a different format. In addition, this step  will hit the "Motherland Salvation Movement". This is how it was,  "said the head of the office of the second RA President.

At the same time, he added that it may seem that Ter-Petrosyan said  everything correctly, and they only repeat what was previously  stated, however, it is noteworthy that Ter-Petrosyan, sort of  accidentally stipulates that President Kocharian created the  "Motherland Salvation Movement".

"P.S. As for the proposal to go together in early elections, we have  already chosen another format of participation, which we will  announce in the very near future," Soghomonyan said in a statement.

As for the proposal of the first President of Armenia on joint  participation in the upcoming parliamentary elections, we remind you  that the Republican Party headed by the third President of the  Republic of Armenia made and announced its decision on the format of  participation in the elections just a few days ago. Serzh Sargsyan's  position is that in the current situation it is necessary to choose  effective tactics to solve the problem, therefore the fight against  capitulatory authorities can be carried out in various formats, "the  statement of the office of the third RA President says.

It is also worth noting that Acting Prime Minister Nikol Pashinyan,  who drew attention to the fact that Levon Ter-Petrosyan twice tried  to achieve a change of power in the course of his opposition  activities, also reacted to this statement yesterday,.  "The first  time was in 2008, during the" democratic revolution ", and the second  time - during the failed" bourgeois-democratic revolution ", the fate  of which everyone knows. We are talking about the activities of the  alliance of Ter-Petrosyan, Gagik Tsarukyan and the Heritage Party "in  2014. Ter-Petrosyan, apparently, decided to try again to make a"  bandocratic revolution. "There are a couple of other terms, but now,  due to my position, I cannot voice them. But seriously, perhaps the  only thing that Ter-Petrosyan really succeeded in all this time is  the coming to power of Kocharian and Sargsyan, as well as their  retention of this power, "Pashinyan said, assuring that the"  bandocratic revolution "will fail .

On May 5,  first president of Armenia, Levon Ter-Petrosyan, issued a  statement in which he called on the second and third presidents of  Armenia, Robert Kocharian and Serzh Sargsyan, to oppose Pashinyan as  a single pre-election bloc.  Ter-Petrosyan called on his colleagues  to unite in a united front, since this may become the only way out of  the current national crisis in the country and an opportunity to  avoid new troubles. "The duty of all Armenians is to realize that the  reproduction of the Pashinyan regime for Armenia and Artsakh is much  more dangerous than the possible or perceived threats emanating even  from Azerbaijan and Turkey," he said.