"There is a future" will be new slogan of "Civil Contract" 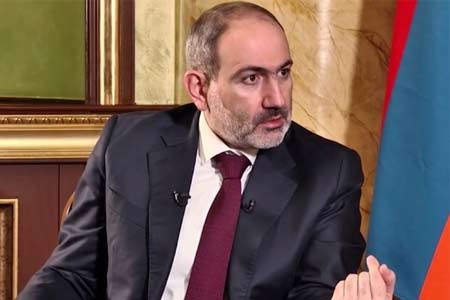 ArmInfo.The new slogan of the ruling party "Civil Contract" in the upcoming parliamentary elections will be "There is a future". Acting Prime Minister of Armenia Nikol Pashinyan stated this in his speech in parliament.

Answering the questions of the MPs, Pashinyan noted that from a  conceptual point of view, he believes that Armenia historically  developed when it was not in a state of blockade. In his words, such  were the years of Soviet Armenia, when the development of the country  achieved very high rates. In retrospect, these years are very  difficult to overestimate. As the Prime Minister stated, Armenia's  rivals know and understand this very well, therefore they will do  everything to keep Armenia in a state of blockade. It is their  strategic task to ensure that the country remains in an isolated  state. Therefore, for the development of Armenia, the dominant task  should be the opening of communications, the unblocking of the  country, including in the direction of Iran.

In this regard, Pashinyan is confident that Azerbaijan will continue  its unconstructive policy, including at the level of statements and  official rhetoric, in order to sow a climate of fear among the  Armenian public.  Pashinyan recalled that he had already spoken about  the importance of Armenia's railway connection with the outside  world, including for the development of the manufacturing industry  and the mining industry.

The second and, perhaps, the key factor, the cornerstone of ensuring  the country's security will be deepening ties with Russia as a  strategic partner in terms of strengthening the joint group of forces  and air defense. As a continuation of this process, the country must  seriously strengthen its army, transferring it to professional rails  as a strategic goal of its reform. And this is not about contract  service, but about the professional army, since experience has shown  that these are different categories.

The next strategic task will be to improve the demographic situation  in the country through a serious reform of the educational system  through profound changes in the entire educational chain and in the  scientific field.

The future of Armenia should be built on these three pillars:  security, industry, education and science.

Speaking about the confidence of the citizens of Armenia in the  future of their country, Pashinyan noted that these doubts among the  population are not a new phenomenon, that even before the "velvet  revolution" these doubts and disappointments were deepening all the  time. After the revolution, people's hopes increased significantly,  but after the outbreak of the pandemic and as a result of the war,  this problem became aggravated again. He urged not to panic over such  sentiments. "Through our work, step by step, we must restore this  faith, which can be done by improving the economic situation,  improving the education system, etc. And the party "Civil Contract"  will talk about this during its election campaign>, Pashinyan  emphasized.