Aivazian: The agenda of Lavrov`s visit to Armenia includes a  discussion of the issue of resuming the peace process on Karabakh 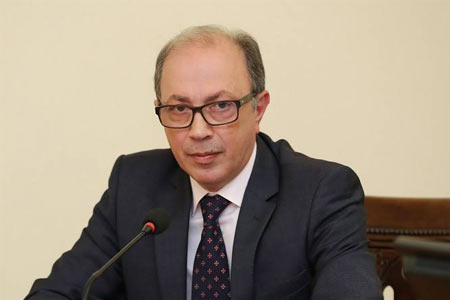 ArmInfo. The agenda of the visit of Russian Foreign Minister Sergey Lavrov to Armenia includes, among other issues on the bilateral agenda, the continuation of discussions  on the resumption of the peace negotiation process on  Nagorno-Karabakh. This was announced on May 5 from the rostrum of  parliament during the government hour by  acting Foreign Minister of  Armenia Ara Aivazian, adding that the Russian minister's plane will  land at Yerevan airport in the next few hours.

Speaking about the activities of the OSCE Minsk Group Co-Chairs,  Aivazian recalled that in the post-war period the mediators made  statements twice - on December 3, 2020 and April 13 this year. He  once again reminded that the assessments of the Armenian side  regarding the activities of the OSCE Minsk Group are known, and they  were presented by Yerevan on December 3 at the OSCE Ministerial  Council. Aivazian added that the road map of Armenia consists of 5  well-known points.

In this context, the RA acting Foreign Minister stated that the  essence of these approaches was more clearly formulated in an  interview by US Ambassador Lynne Tracy, who stressed that the  Nagorno-Karabakh conflict has not been resolved, the negotiation  process should be resumed and the issue of the status of  Nagorno-Karabakh should be a priority.

At the same time, Aivazian noted that more and more partners of  Armenia are making statements in which they clearly point to the  unsettledness of the Karabakh conflict and the need to resolve the  existing problems.

Speaking about the role of mediators, the minister recalled that the  goal of the OSCE Minsk Group is to create an appropriate favorable  environment for the parties to find a solution to the conflict. "It  seems that the OSCE Minsk Group is showing signs of life, and Armenia  hopes that there will be strong mediation, which will not observe the  process from outside, but will lead the negotiations," Aivazian said.

Touching upon the issue of Armenian prisoners of war and captives,  the minister stressed that this issue is in the center of attention  of the Foreign Ministry. "And it should be noted with satisfaction  that thanks to the efforts of the Russian side, 70 prisoners of war  and civilians have already been released and returned home. This  issue is in the focus of attention of the international community and  Minsk mediators.  International pressure on Azerbaijan is growing day  by day," Aivazian concluded.