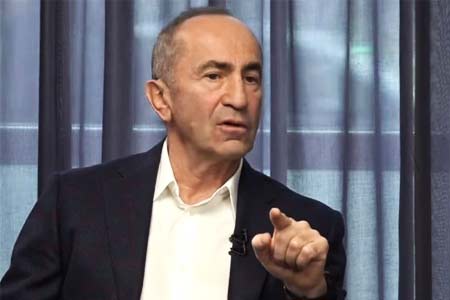 ArmInfo. The second President of Armenia, Robert Kocharian, has discovered two new qualities in Armenian society that he hopes will be temporary, otherwise the  country will never make progress.

So, at a meeting with his supporters, he noted that he had discovered  two new qualities in the Armenian society - tolerance for lies and  unprofessionalism. He pointed out that every speech of the leader of  the country, the statements made by him, are refuted literally 15  minutes after what was said. <And despite this, he has quite a large  number of supporters. This is not normal. I think that there should  be a criminal penalty for lying on the part of an official, and even  more so the first person of the state. For example, by force of law,  if it turns out that an official lied, he loses his position and for  5 years has no right to hold public office. Such strict methods  should be applied to get rid of this phenomenon, " Kocharyan  believes.  According to him, the first person should be a role model,  and you can not constantly lie. Kocharyan stated that this is  becoming a kind of role model <It turns out that in your society ,  lying becomes a normal phenomenon, a way of life, which is not  normal. And the second is unprofessionalism. The minister is  appointed by a person who has not led three people in his life. His  entire professional career is a school certificate and a diploma of  graduation. And most importantly-there is no public resistance to  this phenomenon, and this is also not normal>, - said the second  president, adding that this is a manifestation of a certain stage of  ignorance, and it will be impossible to change society until these  qualities are changed.  Speaking about fabricated criminal cases,  Kocharyan called it abnormal when people in the country are proud of  their own criminal cases.

<When, in the country, there is no head of the community who would  not be held on three criminal cases, or the mayor, who is charged  with 28 crimes. There are criminal cases in which, after the  initiation, no investigative measures were carried out for two years,  and officials no longer see anything wrong with this, they get used  to life with this status. After the removal of this government, we  must return to the previous perception that what is under  investigation is not good, " Kocharyan said.