On April 20, Converse Bank started the initial placement of the next AMD and dollar bonds 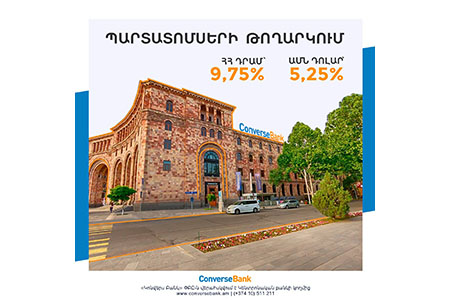 ArmInfo. Converse Bank started the initial placement of the next tranches of AMD and  USD bonds in the amount of AMD 3 billion and $10 million. This was reported to ArmInfo in the press service of Converse Bank, explaining that in the near future they will be available in the bank's mobile application. The nominal value of AMD bonds is set at 50 thousand AMD, and dollar bonds at $100.

The coupon yield is 9.75% on dram bonds and 5.25% on dollar bonds, respectively. The term of circulation of the bonds in both cases is provided for 36 months, and the frequency of payments under the coupon is once every six months.

According to the Bank, the above-mentioned issues of dram and dollar  bonds will be listed on the Armenian Stock Exchange upon completion  of the initial placement, which will start their circulation on the  secondary market. The funds raised by the bonds are guaranteed by the  Deposit Compensation Guarantee Fund.  During the year, Converse Bank  plans to issue dollar and AMD bonds with a total volume of up to $20  million and 5 billion drams, thereby ensuring the continuity of  alternative financial products provided to customers.

Investments in bonds, unlike deposits, have a number of advantages,  of which the most significant is the exemption of the interest income  received from taxes. Another advantage is the possibility of selling  the bonds on the secondary market before the expiration of their  circulation.

More detailed information about the new issues is available on the  Converse Bank website under the link: https://conversebank.am/hy/2021issue/

It should be noted that Converse Bank has been operating in the  Armenian market since September 1996. As of January 1, 2021, the  Bank's shareholders are Advanced Global Investments LLc (hand of  Eduardo Ernekyan) - 72.89%, HayPost Trust Management B. V.-22.11%,  and the Cathedral of the First Cathedral of Etchmiadzin - 5%.