Armenian President speaks on relations with Georgia, Turkey and  Azerbaijan 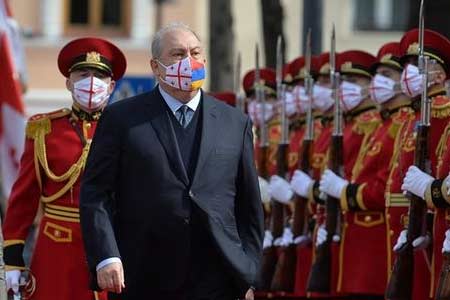 ArmInfo. Armenia should pursue an active foreign policy, develop cooperation with all states, no matter big or small, and especially with its friendly neighbors -  Georgia and Iran. Armenian President Armen Sarkissian said this in an  interview with journalists, summing up the results of his visit to  Tbilisi.

At the same time, he added that diplomacy should to some extent  actively work with countries unfriendly to Armenia, but relations  with friends should be in a special place.

"We must be able to show the world that even after the war we are  strong. You can lose 5 wars, but each time get on your feet, go  forward and win. We won 26 years ago, but we did not work much, did  not take seriously these issues, we decided that this victory is  forever, and so on. But we must take defeat so seriously, stand on  our feet and move forward together. You cannot win in life if there  is a split, "he said.  The Armenian President added that during his  meetings in Georgia he presented in detail the position of Armenia on  the war, how it happened and why. "Of course, we must not forget  about our prisoners and hostages. Unfortunately, the enemy uses their  life, their captivity as a trump card. This is unacceptable from the  point of view of international law. I will always raise this issue  until it is resolved. When you speak about this here, not only the  President of Georgia, the people, but also the international  community hears it, "Sarkissian said.

The President noted that regional cooperation was discussed at the  meetings: "It is very important to take steps so that stability  reigns in the region. And stability without a just and final solution  to the Artsakh issue will be almost impossible."

Speaking about the proposal of the President of Georgia to become a  platform for dialogue between Armenia and Azerbaijan, Sarkissian  said: "This is not the first time the Georgian side has offered to be  a platform where the parties can negotiate. This is an honest  proposal, although it is not yet clear to me who will hold this  conversation and what topics it will touch upon.

Before talking about any serious interstate negotiations, the  opposing side must show at least an elementary human attitude. Even  if you are an enemy and an adversary, you should not block the paths  for future dialogue. " At the same time, noting the importance of  regional stability, Sarkissian pointed to the existence of many  problems in Armenia after the war and against the backdrop of the  coronavirus pandemic. "Therefore, when we talk about regional  security, it means health security, political, military, information  or cyber security, right up to food security. These are problems for  everyone, but primarily for a country like ours, which is under  siege. ",  the RA President said.  Referring to the fact that  discussions on Karabakh were held in the Georgian parliament, the  president stated that, of course, Georgia is worried about new  regional realities. "If you think that the Artsakh problem is only  our issue, then you are mistaken. Until this issue has received a  fair, final solution, it will be difficult to talk about stability  and predictability. So, this is everyone's problem. The Artsakh  problem is not the only problem in the South Caucasus. Therefore, we  ourselves should be interested not only in the Artsakh issue,  relations with Turkey and Azerbaijan, but also to be sensitive to the  problems of friendly countries. I believe that we need to deepen our  relations with the Islamic Republic of Iran and Georgia.

At the same time, he said that during the meetings all possible  programs, proposals, all possible transport solutions and schemes  were discussed. "We discussed all this with the President. In the  end, Armenia should become not a dead end, but a crossroads. If we  can make Armenia a crossroads ... But besides this abstract desire,  there are a lot of difficulties. How are you going to open the way  with Turkey, with Azerbaijan? "Before opening the way, it is  necessary to take a thousand and one steps, the first must be from  Azerbaijan, it must be from Turkey," the head of state said.   Referring to the discussion in Armenia on the need to establish  long-term peace in the region and establish relations with Turkey and  Azerbaijan, Sarkissian recalled that his position on the issues of  relations with Ankara and the Armenian Genocide is well known.  "As  for Azerbaijan, we are not in the same position. Before we talk about  anything with Azerbaijan, we first need to return our boys and girls,  then we will think about the next step.

The restoration or normalization of bilateral relations cannot occur  at the expense of one side, at our expense. I will not be able to  forget the Genocide, put aside the difficulties, misfortunes and  history of our people for more than 100 years, if the other side does  not take any steps towards it, does not recognize or apologize, etc.  When this happens, then we will think, and then you will ask me a  question, "the RA President said.  In conclusion, the head of state  pointed out that there are many opportunities for the development of  economic relations between Armenia and Georgia. "Georgia, for  example, has customs advantages with China and the European Union,  and Armenia with the Eurasian Economic Union. Imagine a Georgian-  Armenian joint venture capable of selling its products with customs  privileges in the EU or China. And vice versa, an Armenian-Georgian  enterprise, which can sell goods in the Eurasian space. Or  cooperation in the field of health care, in the field of science,  from new technologies to the fight against COVID. I can assure you  that if Armenia and Georgia propose joint projects that are  bilateral, have bilateral investments, are infrastructural, then many  investors, international financial institutions, starting with the  European Bank, the World Bank, will be happy to finance, even private  individuals. Joint projects are much more attractive than small ones,  "he concluded.