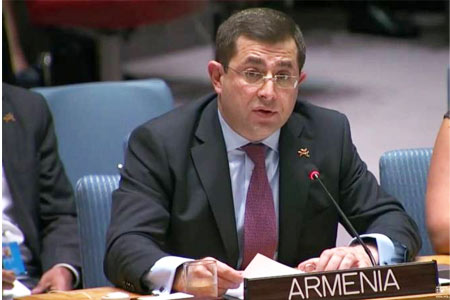 ArmInfo. Armenia's Permanent Representative to the UN Mher Margaryan sent a letter to the Secretary General of the Organization Antonio Guterres regarding the  opening of the so-called "military trophy park" in Baku.

As reported by the RA MFA press service, he pointed out that the most  inhuman "collection" of wax figures depicting ethnic Armenians is  exhibited in the so-called park, as well as a terrible exhibition of  helmets, equipment and personal belongings of Armenian soldiers  killed during the 44-day war.  "The celebration of human death and  suffering at the highest political level in Baku through the  promotion of slanderous and inhuman images of ethnic Armenians is  another manifestation of the state's policy of inciting hatred  towards Armenians and a clear demonstration of genocidal intentions,"  Margaryan's letter says.

On April 12, a park of captured Armenian equipment appeared in Baku  in the form of a dramatization of the events of the war. The  monstrous structure is located on five hectares. "The real picture of  the defensive fortifications that the enemy created over several  decades has been recreated. Here you can see a powerful barrage  system of 10 lines, including concrete engineering structures,  anti-tank ditches and hedgehogs, mined areas, tunnels, trenches,"  Azerbaijani media reported. Mannequins depicting Armenians in various  degrading poses give a special meaning to the "park". Ilham Aliyev  has already managed to pose against the background of trophy helmets.