Head of U.S. Senate Foreign Relations Committee (SFRC) stated that  U.S.  must press Azerbaijan to release the prisoners of war 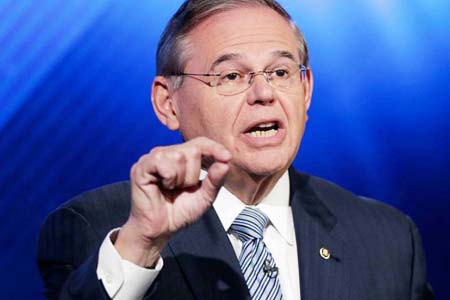 ArmInfo. During the U.S. Senate Foreign Relations Committee (SFRC) on Thursday, April 15, 2021, of Ambassador Victoria Nuland to serve as U.S. Under Secretary of State for Political Affairs, SFRC Chairman Bob Menendez (D-NJ) raised key issues relating to the Armenian people, including the Armenian prisoners of war still  unjustly held captive by Azerbaijan and the need for robust  humanitarian assistance, reported the Armenian Assembly of America  (Assembly).

Referring to the 44-day war launched by Azerbaijan, with the full and  open support of Turkey, against the Armenian people in  Nagorno-Karabakh (Artsakh) on September 27, 2020 as an "unspeakable  tragedy" and the "inexcusable" absence of top-level United States  diplomacy throughout the war, Chairman Menendez stated that the "U.S.  must press Azerbaijan to release the prisoners of war members that it  has - which [Azerbaijan] is refusing to release them - in violation  of international law."

Amb. Nuland confirmed that the U.S. has to "get the prisoners  released."

"I've worked on Armenia, Azerbaijan, Nagorno-Karabakh issues for some  25 years, and the way things went down last year was absolutely  tragic for so many in the region," Amb. Nuland continued.

During the afternoon hearing, Chairman Menendez also spoke about the  significance and urgency of U.S. humanitarian assistance to Artsakh  and the importance of "ensuring that the Armenians displaced from  their homes in Nagorno-Karabakh get the assistance they need."

Amb. Nuland replied in full agreement about committing to robust  humanitarian assistance, including demining funds, and to ensuring  the "sovereignty and territorial integrity of Armenia, and that it  can make its own decisions."

In reply to Chairman Menendez's question about how to revitalize the  OSCE Minsk Group, in order to create a more sustainable peace  process, Amb.  Nuland discussed having conversations with Turkey.

"The Secretary [of State Antony Blinken] has spoken about needing to  be clear-eyed regarding trends in Turkey," said Amb. Nuland. "We've  got a lot of work to do there in our bilateral relationship to make  clear our concerns about not only what Turkey's doing outside its  country, but also what it's doing inside its country."

Amb.Nuland emphasized the importance of conveying "strong support for  the Caucasus countries, being active diplomatically, getting  high-level leadership there, and using all of our economic and  humanitarian tools."

"We commend Chairman Menendez's ongoing leadership," stated Assembly  Executive Director Bryan Ardouny. "The release of the POWs is  paramount as are the compelling humanitarian needs of the Armenian  people. We continue to press forward on all fronts," Ardouny added.