Nikol Pashinyan, at a meeting with the EU delegation, touched upon  the Armenian-hating policy, strongly encouraged by the top leadership  of Azerbaijan 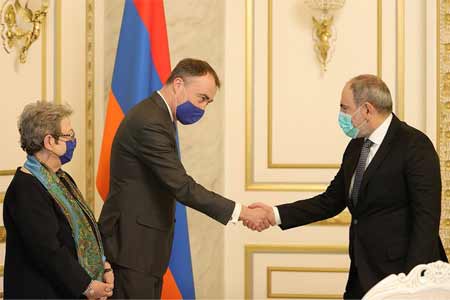 ArmInfo.On April 15, Armenian Prime Minister Nikol Pashinyan received a delegation led by EU Special Representative for the South Caucasus and the Crisis in  Georgia Toivo Klaar. The meeting was also attended by the head of the  EU Delegation to Armenia, Ambassador Andrea Wiktorin.

According to the press service of the government, Pashinyan called  the interaction with the EU productive, within the framework of which  numerous programs are being implemented. He noted the importance of  the EU's involvement in infrastructure projects in the RA. The prime  minister informed that the government has decided to start  construction work on the Sisian-Qajaran road section of the  North-South transport corridor.

Touching upon the situation created after the war in Artsakh  unleashed by Azerbaijan, Pashinyan noted that the issue of returning  prisoners of war remains an important priority for the Armenian side,  which is enshrined in the 8th paragraph of the Statement of November  9, 2020. Meanwhile, Azerbaijan, he said, is making an attempt to  distort the interpretation of this point and delay the return of  prisoners of war, hostages and other detainees.

Nikol Pashinyan touched upon the Armenian-hating policy, strongly  encouraged by the top leadership of Azerbaijan, a clear manifestation  of which is the "park" opened in Baku on the theme of the Artsakh  war, the demonstration of war crimes and the involvement of children  in this policy.