Lukashenko: Belarus sincerely welcomes the agreement on the complete  cessation of hostilities in the zone of the Karabakh conflict 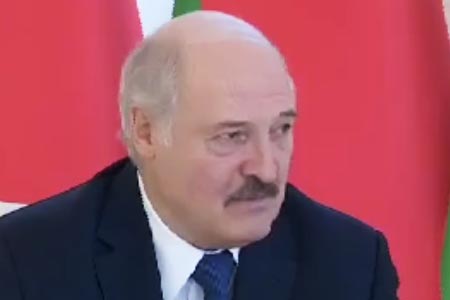 ArmInfo.Belarus sincerely welcomes the agreement on a complete cessation of hostilities in the zone of the Nagorno-Karabakh conflict. This was stated by President  of Belarus Alexander Lukashenko at a meeting with journalists in Baku  following talks with his Azerbaijani counterpart.

"This is an important political decision, which should become the  basis of lasting peace in the region. With which I would like to  congratulate the people of Azerbaijan and the people of Armenia - on  the end of this terrible tragedy, which lasted 30 years," Alexander  Lukashenko stressed.

The President noted that his position is known both in Azerbaijan and  in Armenia.  "God grant that this misfortune evens out, that there  are no fragments in the soul and heart of the Armenian and  Azerbaijani peoples. What I am convinced: there will be no settling  of scores on the part of my friend and brother, there will be no  revenge," the Belarusian leader said.

Ilham Aliyev, in turn, stated that Azerbaijan is aimed at  strengthening confidence-building measures in relations with Armenia.  "We expect that Belarus, as our friend, a trusted partner, will take  an active part not only in the restoration of territories. Belarus,  as a partner of Armenia, a country that together with it is a member  of the EAEU and the CSTO, and as a country that is a close friend of  Azerbaijan, can play an important role in establishing contacts  between Armenia and Azerbaijan, "he added, according to Lukashenko's  press service.