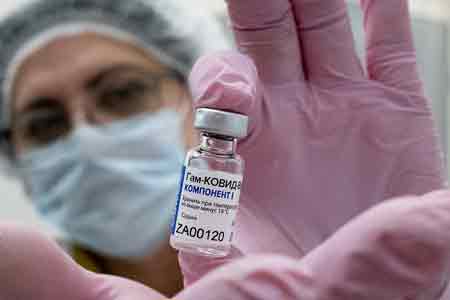 ArmInfo.At a high level, an agreement was reached between Armenia and Russia on the purchase of 1 million doses of Sputnik V vaccine. On April 14, answering the  questions of parliamentarians, Minister of Health Anahit Avanesyan  said this.

She noted that by the end of the year it is planned to  organize the vaccination process for about 20% of the population. The  minister noted that in most states, according to the situation, from  1% to 15% of the population were vaccinated today, and only in rare  countries 30% -40% received an injection.  Speaking about the  mortality rate from coronavirus, Anahit Avanesyan said that the rate  registered in Armenia is lower than the world average, it is about  2%, while in Armenia this figure is 1.7%.  It should be reminded that  during a meeting with Russian President Vladimir Putin, Armenian  Prime Minister Nikol Pashinyan said that Yerevan needs more than a  million doses of anti-clot vaccine.  According to Pashinyan, the  Russian vaccine has already proven its effectiveness in practice and  it is important for Armenia to purchase it.

Note that the cost of two doses of Sputnik V was $ 19. The Sputnik V  vaccine is currently registered in Russia, Belarus, Argentina,  Bolivia, Serbia, Algeria, Palestine, Venezuela, Paraguay,  Turkmenistan, Hungary, the United Arab Emirates, Iran and a number of  other countries. The vaccine was developed by the Gamaleya Center and  became the first coronavirus vaccine in the world and in Russia. The  final effectiveness of the drug was 91.4%, with respect to severe  cases of COVID-19 - 100%. Sputnik V vaccine is approved for use in  Armenia.