Permanent Representative of Russia: It is important to send a UNESCO  assessment mission to the Nagorno-Karabakh zone as soon as possible 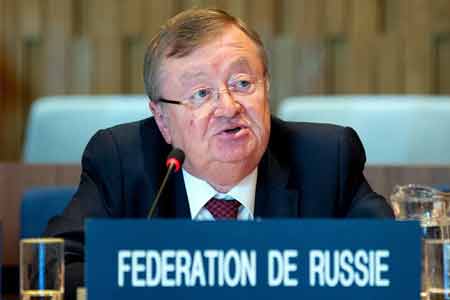 ArmInfo.Russia's Permanent Representative to UNESCO, Alexander Kuznetsova, stressed the importance of sending a UNESCO assessment mission to the  Nagorno-Karabakh zone as soon as possible.

Thus, the head of the Russian delegation, the Permanent  Representative of Russia to UNESCO, Alexander Kuznetsov, speaking at  the 211st session of the Executive Council of the Organization in  Paris, expressed his conviction that building a lasting peaceful  future is impossible without respect for the past.

"Additional efforts should be directed to the protection of heritage  sites, including in situations of armed conflict. We hope that UNESCO  will mobilize its potential for the restoration of cultural monuments  in Syria. It is also important to send a UNESCO assessment mission to  the Nagorno-Karabakh zone as soon as possible. We believe that the  work of the mission will be of a purely humanitarian, depoliticized  nature, " Kuznetsov said.

It should be noted that Azerbaijan is delaying in every possible way  the issue of sending a UNESCO mission to the Karabakh conflict zone,  while actively engaged in the destruction of the Armenian cultural  and religious heritage in the territories that have come under  Azerbaijani control. Along with the vandalism of historical  monuments, two reliable facts of the destruction of Armenian churches  have already been recorded - the Armenian church of Zoravar Surb  Astvatsatsin in the Karabakh village of Mehakavan (Jabrayil) and the  Green Chapel in Shushi were completely destroyed by the Azerbaijani  Armed Forces.  It should be noted that on November 20, 2020, UNESCO  Director General Audre Azoulay announced the organization's readiness  to send a mission to Karabakh to help restore the cultural and  historical heritage of the region.

In December last year, UNESCO Deputy Director General Ernesto Ottone  noted that the organization " is still waiting only for Azerbaijan's  response, so that UNESCO can continue to work with the direction of  the mission on the ground." In turn, the Azerbaijani Foreign  Ministry, in a communique issued on December 22, called on UNESCO not  to politicize the issue of protecting cultural heritage in Karabakh  and said that Baku is " open to a constructive dialogue to discuss  the details of the organization of the mission." The Russian Foreign  Ministry has also repeatedly stated that Moscow expects the visit of  the UNESCO mission to Nagorno-Karabakh in the near future.