The Ombudsman of Artsakh: It is not so much the absolute disrespect  of the dictator of Azerbaijan for humanity that is surprising, but  the indifference and tolerance of the civilized world 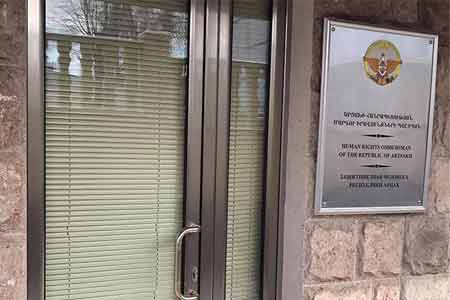 ArmInfo. The opening of the festation of the  painful Armenophobia of the Azerbaijani authorities, which, on the  one hand, expresses a huge hatred of Armenians in Azerbaijani  society, on the other - is the source of this hatred. This is stated  in the statement of the Office of the Artsakh Ombudsman.

"At the same time, it is not so much the absolute disrespect of the  dictator of Azerbaijan for humanity that is surprising, but the  indifference and tolerance of the civilized world.

Before the eyes of the whole world, Ilham Aliyev, with fascist  cynicism, publicly insults and humiliates the dignity of an entire  nation, deliberately inflicts suffering on the relatives of fallen  soldiers, missing persons and prisoners of war.

Instead of expressing condolences and shouting about the universality  of human rights, the international community must properly assess the  atrocities committed by Azerbaijan and hold Baku accountable for the  crimes against humanity committed during the 44-day war," the  statement of the Artsakh Human Rights Council reads.

It should be noted that the day before, Aliyev visited the so-called  "Park" dedicated to the Artsakh War, where trophies from the last  Azerbaijani aggression against Artsakh were presented. Models of the  Armenian military, presented in humiliating uniforms, were also shown  there.

Only journalists of foreign publications and human rights activists  reacted to these blatant actions of the Azerbaijani authoritarian  leader, who sharply criticized Aliyev.

"This is deeply disgusting and reminiscent of the collection of  helmets at the base of the Victory Arch in Baghdad that Saddam  claimed belonged to Iranian soldiers who died in the 1980-88 war,"  Bloomberg journalist Bobby Ghosh tweeted.

"I've almost stopped tweeting about Armenia-Azerbaijan (too many  vigilantes on both sides), but it's really depressing. The shooting  has stopped, but the mentality of winning=humiliating the other lives  on, " Thomas de Waal said.

"It is no wonder that so many Azerbaijani soldiers have recorded  their brutal war crimes. This kind of debauchery is encouraged and  celebrated at the state level, " wrote investigative journalist  Lindsay Snell.  "This is not what winners look like, but war  criminals: Azerbaijani President Aliyev has built his own amusement  park in Baku: helmets of Armenian soldiers, wax dolls in Armenian  uniforms and a shop...I feel sick," said Dunez Tekkal, a film  director and human rights activist from Germany.

Five months after the end of the war, Aliyev is still wearing a  military uniform, while Azerbaijani officials insist that they are  working very hard on reconciliation... In fact, this is an example of  why it is foolish to think that an Armenian-Azerbaijani  reconciliation is ever possible while Aliyev is in power: "- wrote  Guardian and CNN journalist Neil Hauer.