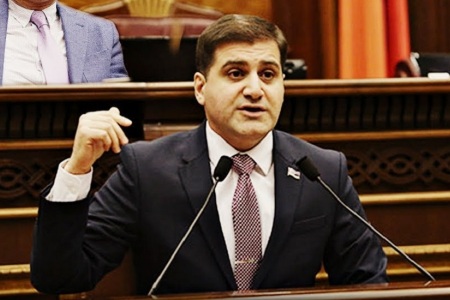 ArmInfo. The latest developments around the Armenian prisoners of war held in Azerbaijan have shown that, in fact, "they are hostages in the hands of the Russian-Turkish tandem," independent member of the National Assembly of Armenia Arman  Babajanyan said on April 13 from the rostrum of the parliament.

"Moscow is not able to fulfill the role of a mediator - peacemaker  assumed by the Trilateral Agreement - statement of November 9, 2020.   According to this statement, Moscow had to guarantee the return of  our captive compatriots to their homeland. Moscow, not Beijing,  Washington, Paris or London, should have guaranteed this, " he said.   So, according to him, "Armenia, which has found itself in the  Russian-Turkish tongs," is not able to solve this issue alone.

In this context, Babajanyan believes that Armenia, in this situation,  should immediately announce the termination of all political  negotiations and discussions until the return of the last captured  compatriot. MP Uzen-Aliev will use the issue of prisoners of war to  ensure a tense situation in the pre-election period. "Armenia's  internal enemies will take advantage of this," he said.

Based on this, the independent MP calls on the day before to think  not only about the military, economic, but also "the revenge of new  geopolitical landmarks and with the help of new partners to gather  strength and restore the ability to confront."