Arman Tatoyan: The so-called "Park" in Baku, dedicated to the  Karabakh war, confirms the genocidal policy of Azerbaijan against the  population of Armenia and Artsakh 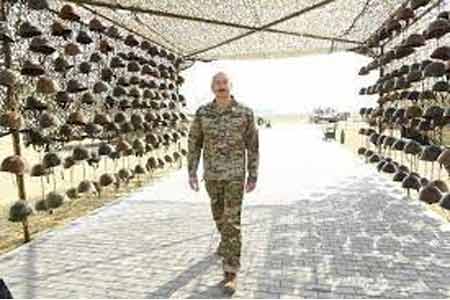 ArmInfo. The so-called "Park" in Baku, dedicated to the Artsakh War, is a proof of the  Azerbaijani policy of genocide and Armenophobia, supported at the  state level. This is stated in the statement of the Human Rights  Defender of Armenia Arman Tatoyan.  Thus, the statement states that  on April 12, 2021, the so-called "exhibition park" dedicated to the  war of September-November 2020 was opened in Baku.

"In the Park, along with the Armenian military equipment, there are  mannequins of Armenian servicemen, which are presented in a  humiliating form. Everything is done to ensure the widest possible  publicity. From the published videos and photos, it is clear that the  "exhibits" in the" Park " are displayed with the aim of inciting  hatred and enmity towards the residents of Armenia and Artsakh. The  demonstrations are made with cynicism in order to publicly humiliate  the memory of war victims, missing persons and prisoners, and violate  the rights and dignity of their families. The personal belongings of  the soldiers of Armenia and Artsakh are displayed with the same  cynicism, and the helmets of the killed soldiers are displayed with  the awareness that this will cause additional suffering to their  families, the Armenian and Artsakh society and cause a new wave of  hatred in the Azerbaijani society," Tatoyan said.

At the same time, he added that the Azerbaijani authorities also show  scenes with Armenian prisoners in the newly opened "Park". "This  deserves special condemnation against the background of the fact that  prisoners of war - military personnel and civilians - are still being  held illegally in Azerbaijan. This is a gross violation of  international human rights requirements.

It was obvious to the Azerbaijani authorities that this sensitive  issue would cause heartache and suffering to the families of the  missing and captives, as well as to the Armenian society as a whole,"  the Armenian Ombudsman said.

It is also emphasized that the RA Human Rights Defender received  numerous complaints and signals of similar content, as well as  disturbing publications in social networks.

"The monitoring of the Human Rights Defender's office has revealed  publications about the exhibition in Azerbaijani social networks (we  will publish this evidence separately) that only welcome and  encourage the initiative of the Azerbaijani President, and the  comments indicate an obvious incitement of hatred and hostility  towards Armenians.

The opening of such a "Park" clearly confirms the existence of a  state policy of institutional Armenophobia and propaganda of  hostility in Azerbaijan. This policy has been consistently  implemented for many years, which is supported by concrete evidence.

It was the consequences of this policy that were the atrocities and  tortures, the murders of Armenian soldiers and civilians committed by  the Azerbaijani Armed Forces during the September-November 2020 war,  the April 2016 war, or other Azerbaijani armed attacks. It is  precisely the hostility maintained at the state level that is the  reason why the Azerbaijani military brutally tortured and killed  Armenian servicemen and civilians, doing it with open faces, with  exceptional cynicism, without even thinking about responsibility,  being sure that they would only be praised for it.

Thus, the "exhibits" in the "Park" dedicated to the war of  September-November 2020 confirm the policy of genocide of Azerbaijan  against the entire population of Armenia and Artsakh.

This absolutely vicious phenomenon proves once again that we should  not allow ourselves to be deceived by the false Azerbaijani  peacefulness: it is just a veil for the international community,"  Tatoyan stressed.  It is reported that this statement of the Human  Rights Defender of Armenia will be sent to international structures,  drawing special attention to the fact that such steps of the  Azerbaijani authorities lead to torture, cruelty, and unequivocally  violate peace and solidarity in the region.