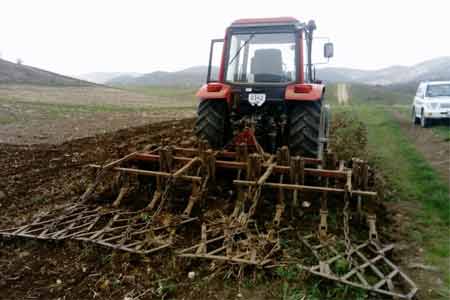 ArmInfo.The Ministry of Internal Affairs of Artsakh issued explanations in connection with the shelling of the Azerbaijani Armed Forces of the residents of the  village of Sarushen.

So, according to the ministry, on April 7, at around 09:40 local  time, the Azerbaijanis opened fire from the territory of the village  of Sargsashen, occupied by Azerbaijan, on the residents of the  village - 65-year-old brother-in-law Adamovich Sarkisyan and  36-year-old Vitaly Aleshevich Harutyunyan, who are engaged in  agricultural work in the fields of the Sarushen community.

"The Azerbaijani side used a machine gun, as a result of which the  left side window of the tractor belonging to V. Harutyunyan was  broken.

The investigators of the Askeran district Police Department of the  Ministry of Internal Affairs of the Republic of Armenia questioned  the victims, prepared relevant materials, and drew up a protocol for  submission to the command of the Russian peacekeeping contingent.

In addition, by the order of the Minister of Internal Affairs Karen  Sargsyan, the service of police officers serving on the  Shosh-Sarushen-Karmir Shuka interstate highway will continue in an  enhanced mode. It should be noted that this is the second incident  between Armenians and Azerbaijanis on the specified road section, "  the Ministry of Internal Affairs of Artsakh said in a statement.

The village of Sarushen is located on the border, and Azerbaijanis go  by the village every day to Shushi. After the war, the village was  again fully populated.