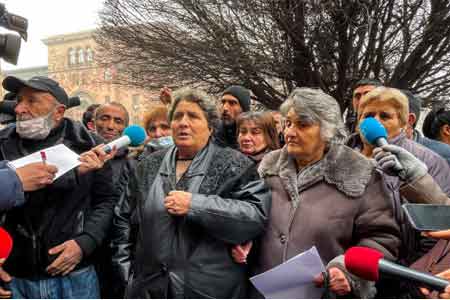 ArmInfo. Parents and relatives of the dead and missing servicemen continue to block the entrances and exits from the building of the Ministry of Defense of  Armenia.

One of the relatives of the missing serviceman, Arsen Ghukasyan, said  during a live broadcast that they have been at the Armenian Defense  Ministry for almost a day, but no one has come out to them - neither  the Defense Minister nor the Chief of the General Staff. According to  him.

There was a proposal from the General Staff to hold a meeting with 5  delegates, then the figure increased to 15, but they did not agree to  this.

"We ask that they come and answer the questions of all those  gathered. If they were afraid that we could do something to them, let  them talk through the bars, but let them come and answer our  questions. However, just a couple of minutes ago, a helicopter of the  RA Defense Ministry landed on the platform in front of the ministry  building and took Minister Vagharshak Harutyunyan, I can't say  whether the Chief of the General Staff was with him or not, but the  fact remains, " Ghukasyan said.

It is also worth noting that a number of media outlets report that  the parents of the missing servicemen also blocked a number of  interstate highways, including the Gyumri-Yerevan and Gyumri-Vanadzor  interstate roads