Nikol Pashinyan: The Artsakh issue was one of the main topics of  discussion with the President of the Russian Federation 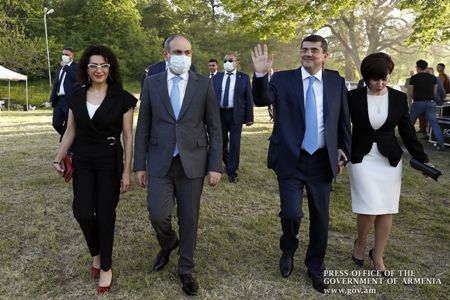 ArmInfo.The Artsakh issue and the situation around it were one of the main points of discussion with Russian President Vladimir Putin. Armenian Prime Minister Nikol  Pashinyan informed Artsakh President Arayik Harutyunyan about this  during an official meeting, presenting the results of his visit to  Moscow.

In turn, Harutyunyan attached importance to the role of the  President of the Russian Federation in the issue of concluding peace  and the Russian peacekeepers in the post-war period from the point of  view of ensuring security in Artsakh.

"We managed to solve not only social problems of the first  importance, but also to determine further steps for the future. I am  satisfied with the outcome of our joint discussions, and the  decisions that follow from them, which are gradually being  implemented. But I want to emphasize the importance of the  coordination of our actions in the security and the political fields,  in particular, related to the status of Artsakh.  Therefore, from  this point of view, I attach special importance to your visit to  Moscow, "said Harutyunyan.

It should be noted that during a meeting with Russian President  Vladimir Putin, Nikol Pashinyan noted that the presence of Russian  peacekeepers in Nagorno-Karabakh is becoming an important factor in  stability and security in the region. "I hope that today we will  discuss some of the nuances of the activities of the Russian-Armenian  Joint Group of Forces, we also have a Joint Regional Air Defense  System, and there are some nuances that, I hope, we will be able to  clarify today," he said.

At the same time, the prime minister pointed to "an important issue  that has not yet been settled - prisoners of war, hostages and other  detainees." In this vein, Pashinyan recalled that this issue was to  be resolved within the framework of the trilateral statement of  November 9, 2020.