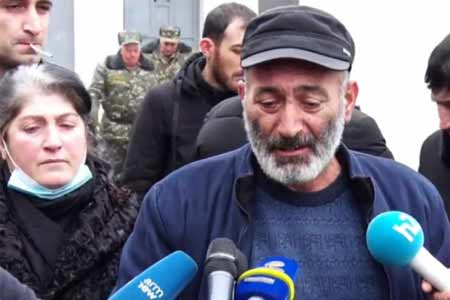 ArmInfo.Parents and relatives of the dead and missing servicemen continue to beat the  thresholds of state institutions with the hope of getting at least some information.

So, today, on April 8, they again came to the building of the  Ministry of Defense of Armenia.

Arsen Ghukasyan, one of the relatives of the missing serviceman, said  during a live broadcast that after the previous meeting in the  Ministry of Defense, the promises were not fulfilled, and they were  forced to come here again. At the same time, he called on those who  are not indifferent to join them, adding that now the action will be  long-term. "No one has approached us yet. I call on all those who  share our grief to join us. We will stay here until the issue of our  children is resolved, " Ghukasyan said.

It should be noted that the exact number of those killed and missing  during the 44-day war in Nagorno-Karabakh is still unknown. According  to preliminary data, more than one thousand Armenian servicemen are  considered missing.