On the day of motherhood and beauty, a group of opposition women  organized a protest march 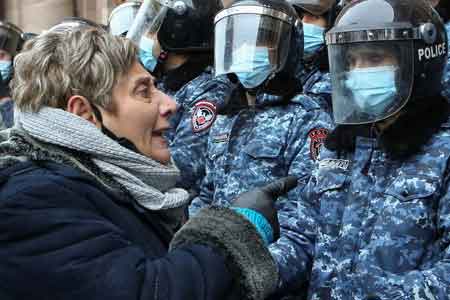 ArmInfo.Today, April 7, on the Day of Motherhood and Beauty, a group of opposition women staged a protest march demanding the resignation of Armenian Prime Minister Nikol Pashinyan.  A group of women staged a protest in Charles Aznavour Square, then  went to the government building, demanding the resignation of the  government.

Outside the government building, police began detaining protesters  who tried to enter the building. Several of the most active women  were detained and taken to police stations. According to unverified  information, the police also tried to detain by force the wife of the  head of the Motherland Salvation Movement Vazgen Manukyan.

According to the latest information, the women were not detained for  long time and soon began to be released from the police stations.