MP from "My Step": If we are not elected, we will simply leave 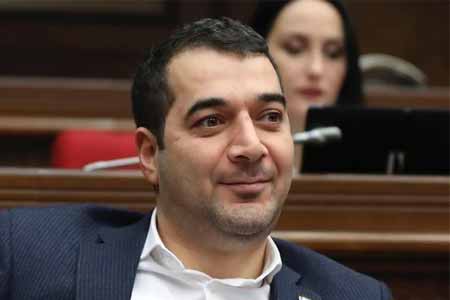 ArmInfo. In the absence of force majeure, for example, an unprecedented increase in people infected with coronavirus, the resignation of Armenian Prime Minister Nikol  Pashinyan and the holding of early elections in the country are  inevitable. A similar opinion was expressed to ArmInfo by the deputy  of the parliamentary faction "My Step" Hrachya Hakobyan.

On March 18, following consultations with the leaders of the two  opposition factions of the National Assembly, Gagik Tsarukyan and  Edmon Marukyan, Armenian Prime Minister Nikol Pashinyan announced his  intention to hold early parliamentary elections on June 20 this year.   "At this stage, there are no obstacles on the way to early elections.   RA similar situation, as we can see, is developing in the direction  of reforming the Electoral Code. Since the revolution, our team has  had the political will to reform the Electoral Code, and we will  consistently continue to implement it, " he stressed.

Commenting on the accusations of using an administrative resource  during the Prime Minister's regional visits in order to organize his  meetings with as many potential voters as possible, the  pRarliamentarian said that such accusations are unfounded. According  to him, such accusations have nothing to do with reality. And the  Radministrative resource, the method of blackmail, the ruling force  does not apply, does not intend and cannot apply because this method  is alien to it a priori.

According to Hakobyan, on the eve of the parliamentary elections, the  ruling team has already started discussions on the election program.   At the same time, he noted that he does not know anything about the  discussions around the proportional list of the "My Step" block. The  MP only shared his personal belief that some people within the ruling  power will be more effective in their work in parliament, and some in  the government.

Commenting on the prospects of his team's victory in the upcoming  elections, Hakobyan expressed confidence in its victory. And he sees  a lot of prerequisites in favor of implementing his forecast. In this  light, the parliamentarian noted the results of opinion polls,  according to which even before the start of the election campaign,  "My Step" already has electoral support of 33%. Such data allow  Hakobyan to expect that the ruling force will overcome the threshold  of 50% + 1 vote if it performs well during the campaign.  "Of course,  the final result will be formed only by the results of the elections.   If we are not elected, we will simply leave. We've talked about it  before, we're talking about it now. If we have committed any crime,  we are ready to stand trial. At the same time, I am convinced that we  did not commit any crimes. In any case, the final answer to all these  questions will be given by our voters, our people, " the  parliamentarian concluded.