Egg producer: Inaction of government agencies on obviously  speculative dumping in 2019-2020 resulted in a deficit and sharp rise  in prices for eggs on the eve of Easter 2021 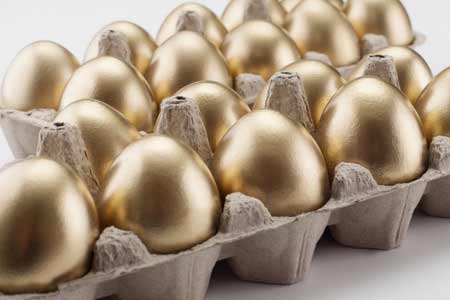 ArmInfo.The inaction of the supervisory government agency on the speculative and dumping policy of unscrupulous economic entities in 2019-2020 resulted on the eve of Easter 2021 with a sharp deficit and an unprecedented rise in the price of eggs.

This was stated in the statement of the Araks poultry farm, published on the  official Facebook page of the company, regarding the situation in the  egg market. "Araks poultry farm, being a leading company in the  production of poultry meat and eggs, is very concerned about the  situation of a sharp rise in the price of eggs in recent years and  especially in the days preceding Easter. We believe that the reasons  for all this are not new, they originate from November 2019, when  prices began to decrease in the egg market due to stagnation and an  overabundance of production.

As a result, by the end of 2019 and  January-February 2020, market prices for eggs dropped to 19 drams per  1 piece. As a result, some economic entities were ousted from the  market, and producers had to cut the volumes of production in order  to reduce losses.

Considering the saturation of the local market,  Araks took steps to export eggs, in particular, in March-April and  June-July 2020, 3.9 million eggs were exported, at a much lower price  than the company sold them during this period on the domestic market,  "the company said in a statement.

With regards to the recent increase in egg prices, P / F Araks  considers it necessary to outline a number of circumstances that  caused this situation: "First, the rise in the price of feed - more  than 26% compared to 2019-2020. The dollar exchange rate also had a  significant impact, which in comparison with 2020 increased by more  than 10%, increasing the cost of servicing foreign currency loans of  poultry farms. "

At the same time, Araks declares with regards to publications and  reports about a sharp increase in egg prices in the last days  preceding Easter, that on its part no changes in the selling prices  for eggs were carried out. "Possible reasons for such phenomena could  be a shortage of eggs, since in 2019-2020 there was an oversupply of  egg production, market stagnation, which is why many farms were  forced to go for forced slaughter of poultry and change production  cycles. Well, a decrease in the number of poultry layers led to a  reduction in production volumes. We also do not exclude that some  unscrupulous economic entities, trying to extract super-profit from  the current situation, increased prices for their products, "the  statement says.

Taking into account the above circumstances, P / F Araks wishes to  receive answers from the relevant government agencies to the  following questions: "First, some unscrupulous producers carried out  a dumping policy on the market, reduced prices, and competent  government agencies had to find out which companies initiated this.  Meanwhile, in February 2020, production was initiated, and after 11  months only a decision was made on a fine in respect of 7 poultry  farms, which did not answer the question of who was the initiator of  the dumping and was responsible for the whole process. Second-when  Araks clearly realizing that a decrease in production volumes will  lead to a deficit and by Easter there will be problems in the egg  market, applied to the relevant government agencies for permission to  import eggs, some poultry farms opposed this, saying that there are  no problems with sufficiency. We consider it necessary to find out  who was against the import of eggs, who exactly indicated that there  is no need to import eggs, existing volumes will be enough. The  question arises whether the companies that initiated this process are  to be blamed for dumping.