US Senator calls for US administration to recognize Armenian Genocide 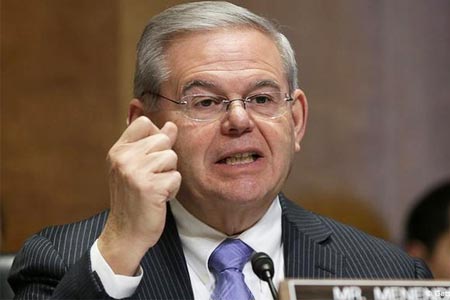 ArmInfo.  Senator Bob Menendez  (D-NJ) - Chairman of the powerful Senate Foreign Relations Committee  - pressed the Biden Administration to join Congress in properly  recognizing the Armenian Genocide and also to work for the release of  Armenian hostages illegally held by the Azerbaijani government,  reported the Armenian National Committee of America (ANCA).

"Whether it's recognizing the Armenian Genocide or demanding the  release of Armenian POWs, Senator Menendez is a principled, powerful,  and persistent advocate - effectively advancing both our U.S.  interests and our American values," said ANCA Eastern Region Chair  and New Jersey resident Ani Tchaghlasian.  "Armenians across New  Jersey and around the nation thank Senator Menendez for his  leadership on issues of special concern to our community and  coalition partners." The Garden State's senior Senator made the  remarks during the confirmation process for Wendy Sherman, who has  been nominated to serve as Deputy Secretary of State, the agency's  number two position.

With regard to U.S. policy on the Armenian Genocide, Sen. Menendez  states, "I hope the President will keep his commitment to recognize  the Armenian Genocide. The United States Senate, by unanimous  consent, passed it. Last year I was proud to sponsor that. The House  of Representatives has passed it. It's time for the President of the  United States to do what the rest of the Congress of the United  States - as representatives of the American people - which is to  recognize the Genocide. Let's call history for what it is."  Sen.   Menendez has already started reaching out to Senate colleagues to  join him in sending a joint letter to President Biden urging him to  properly characterize the Armenian Genocide in the annual April 24th  commemorative statement.