Ex-head of the National Security Service of the Republic of Armenia:  Confrontation between the Armenian government and the Armed Forces  has two possible outcomes 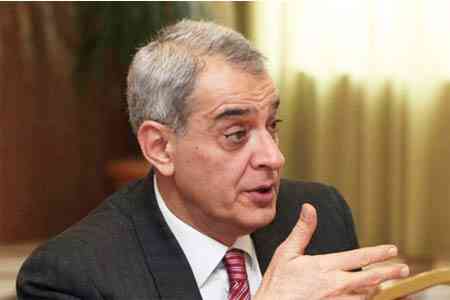 ArmInfo.  The confrontation  between the Armenian government and the Armed Forces has two possible  outcomes. This opinion is shared by the former head of the National  Security Service of Armenia, Ambassador Extraordinary and  Plenipotentiary David Shahnazaryan.

Thus, the message received by ArmInfo from Shakhnazaryan, in  particular, says: "Either Prime Minister Nikol Pashinyan or Chief of  the General Staff Onik Gasparyan will be arrested. There is no other  option and the decision is still up to Colonel General Onik  Gasparyan."

Note that on February 28, Armenian Prime Minister Nikol Pashinyan for  the second time sent to the RA President a draft decree on the  dismissal of the RA General Staff Chief.

The reason for this decision was the statement issued by the RA  General Staff on February 25. Then the chief of the General Staff and  40 high-ranking officers issued a joint statement in which they  called on the prime minister to resign. Pashinyan took this prize as  an "attempted military coup" and signed a decree dismissing  Gasparyan. However, on February 27, the RA President rejected the  draft decree on Gasparyan's dismissal with objections.

On March 2, the President of Armenia announced that he would not sign  the draft decree on the dismissal of Onik Gasparyan, and guided by  paragraph 4 of part 1 of Article 169 of the Constitution, the  President of the Republic will submit a separate statement to the  Constitutional Court with a request to resolve the issue of  compliance with the Constitution of the RA Law on Military Service  and the Status of Servicemen. > dated November 15, 2017.

Reacting to this statement by the President, the General Staff  stressed that the Chief of the General Staff of the Armed Forces of  Armenia, Colonel General Onik Viktorovich Gasparyan, until the  expiration of the 8- day term (after the President's appeal to the  Constitutional Court, other terms begin to operate) will continue  serving the Motherland and the people, is the highest military  commander of the armed forces.  forces.