Edmon Marukyan: the political crisis in Armenia is even more deepened 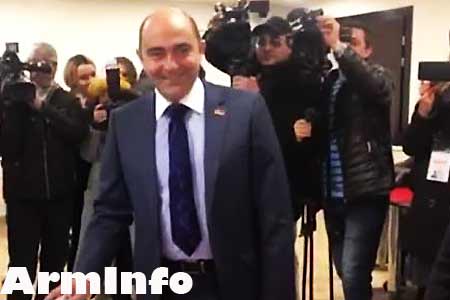 ArmInfo. The political crisis in Armenia is even more deepened.  This was announced on March 5 during the parliamentary briefings, the leader of the opposition  party "Enlightened Armenia" and the faction of the National Assembly  of RA Edmon Marukyan was announced.

According to him, the situation with the general headquarters of the  country's armed forces was added to the existing crisis. For this  reason, the party made an initiative to leave the General Staff alone  and go to the polls.

This proposal was made by Edmon Marukyan during yesterday's meeting  with the Prime Minister Ra Nikol Pashinyan, however, the parties did  not come to any agreements. "The Party" Enlightened Armenia "will  continue to work on finding solutions for the country's withdrawal  from this situation. At this stage, the decision is seen in the  sentence that was done," the deputy said, calling the country's  political forces to join this initiative, which is necessary for the  speedy permit. Situations. The only opportunity to achieve this goal  is extraordinary parliamentary elections.

He noticed that the decision of this problem is largely dependent on  the upcoming negotiations. "Without our participation, the  organization of extraordinary elections is impossible, and we, in  turn, will not be able to solve this issue without the participation  of others. This is a process that requires consensus. This is the  requirement of the people on the conclusion of the country from the  current situation, since people under these conditions are simply  They go crazy. Everyone has the opportunity to purchase tickets and  fly out of this country, simply has a public requirement to solve the  problem, "Edmon Marukyan noted. He added that in case of refusal of  the Prime Minister, to go to early elections, steps will be taken to  find other options.