Kocharian: Armenia needs to find a formula for such integration with  Russia, which will allow the restoration of the country`s armed  forces 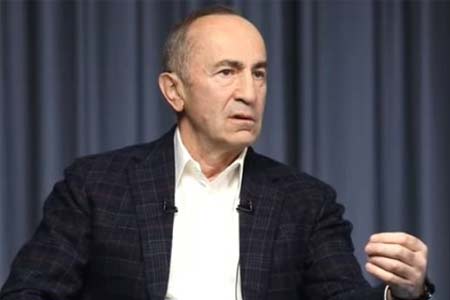 ArmInfo. It is necessary to restore the Armed Forces of Armenia as the most efficient army in the region. The second President of Armenia Robert Kocharian stated this  in an interview with the Russian media, at the same time expressing  the conviction that this can be done with the development of  relations with Russia.

"We must find a formula for such integration with Russia, which will  allow us to restore the country's armed forces," said Kocharian,  quoted by RBC.

The former head of Armenia also commented on the ongoing  confrontation between the General Staff and Pashinyan since last  week, saying that the prime minister should apologize to the general  who argued with him and was dismissed.

"The prime minister admitted that he was wrong (in the dispute about"  Iskander "- RBC). What should a decent person with dignity do? He  should have apologized to the [dismissed] General [Tiran]  Khachaturian, he had to apologize to the General Staff, "the former  president believes.  Touching upon the document signed on November  10, Kocharyan noted that it is laid out in one and a half pages,  while such issues are not resolved in one and a half pages, and many  documents will have to be worked out on individual details.

The second president of Armenia also believes that an unjust peace in  Karabakh will lead to a new war.  Proceeding from the above, he  stressed the importance of revitalizing the activities of the OSCE  Minsk Group.

"The Minsk Group is needed now. Russia also needs it. It is difficult  to say in what direction the negotiation process on the status of  Karabakh will develop. But world experience shows that an unjust  peace cannot last long. If one of the parties does not agree with the  outcome of the war, then wait a new war. A political solution must be  found. And if in Azerbaijan they think that they have solved the  Karabakh problem, it will mean the opposite, despite the current  situation, "Kocharian said.  At the same time, Kocharian refused to  assess the actions of the third RA President Serzh Sargsyan, who  ceded power to Pashinyan.  "We are always trying to look for the  guilty. For me, 2018 was an incomprehensible year. I did not think  that our people could be so easily manipulated. That the use of  technology could be so effective in Armenian society. There were  problems that led to these processes. But there was also an obvious  application of technologies, geopolitics, active intervention of  external non-Armenian forces, "Kocharian said.  Commenting on the  demands of the General Staff for the resignation of the government,  Kocharian expressed his conviction that the generals are behaving too  restrainedly. According to him, this is due to the fact that the  Generals do not want their action to be perceived as an attempt at a  military coup. "At the same time, one should not be afraid of the  phrase" military coup. "There are many cases in history when a  military coup allowed preserving statehood and ensuring the  development of the economy," said the second President of the  Republic of Armenia.