Ashgabat: what does the name of the Turkmen capital mean? 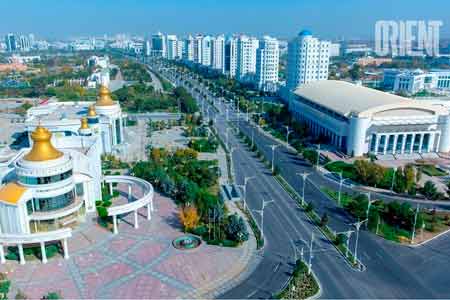 ArmInfo.The Turkmen capital is often called the “city of love” or “city of lovers”. This is also related to one of the legends of Turkmen folklore, according to which in the time when Nurakhmed ruled in Nisa, and Pirakhmed ruled in Anau, the daughter and son of these rulers fell in love with each other against the higher will.

Knowing that they were in danger, they hid in the desert, but, tormented by thirst, they came to the mountains, found a lonely spring, wanted to drink from it, but it dried up in front of their very eyes. The lovers went on and on, until they met a mountain stream, but it also disappeared as soon as they fell into the water.

The young man began digging to get the underground springs, which even more angered the Heavens, and the Almighty sent the angel of death Azrael to them. However, God’s messenger did not have time to carry out the sentence: looking at the girl, he fell in love himself, so much so that he forgot his mission. And then the key of crystal purity, like love itself, came out of the ground. Here, at the wonderful spring that saved the lives of these lovers, they decided to settle, and others, having heard their story, also rushed here.

There are other versions of the name origin of Ashgabat, which go back deep into the past and are closely related to the history of the Turkmen people. Many well-known scientists – both local and foreign – doubted the accepted in the literature interpretation of the word “Ashgabat”.

One of the first was a well-known linguist of the first half of the twentieth century. A.Potseluyevsky, who believed that “Ashk” was the name of one of the Parthian kings. After him, the Parthian name of the city was pointed out by the no less famous archaeologist A. Marushchenko. Their views were shared by the Turkmen scientists S.Agajanov and O.Gundogdyyev. The Farsi historian H.Ovnuk confirmed that in the Persian-language literature of the Middle Ages, the dynasty of the Parthian kings of the Arsakids (Arshakids) was called Ashkanids (Ashkans). In the Armenian sources of the Middle Ages, the Arsakids were also called Ashkanids, and the founder of the dynasty Arshak the First – Ashk the First.

The data of ethniconymy, toponymy, written sources, archeology and ethnology directly indicate that the Arsakids – natives of the Dakho-Massaget (Scythian-Sarmatian) environment, who were called by the common name “Turs” (Turanians), are the ancestors of modern Turkmens, whom the historian Lev Gumilev called the Turkic-like Arius. And the capital of Turkmenistan, Ashgabat, is situated only a dozen kilometers from the former residence of the Parthian kings – Nusay – the spiritual capital of the Great Parthian Empire, the most powerful state in the East, a rival of Rome.

In the middle of the third century BC, a well-fortified fortress built under orders of the Arsakids appeared on the territory of present-day Ashgabat. In the Middle Ages, the fortress turned into a fortified castle of the local ruler, which especially flourished in the Turkmen-Seljuk period (11-12 centuries). The fortification had round towers, lined with excellent burnt brick, with a solid foundation. Archaeologists have discovered many bronze and ceramic products. The castle was located in the center of modern Ashgabat.

The sensational hypothesis of the Russian journalist and writer Vladimir Sherbakov about Asgard – the city of the deified ancestors of the Aces from Norse myths, which was located on the site of the ancient capital of the Parthian kingdom – Nusay in the foothills of Kopetdag, also points to the Parthian origin of the name of Ashgabat. The writer came to his discoveries on the basis of studying many written sources of different peoples.

In the 17th century, an ancient manuscript was found in Copenhagen, containing heroic songs in Old Norse about gods and heroes, about the events of the great migration of peoples in the first centuries of our era. Long before the discovery of the book called “The Elder Edda”, namely in 1222-1225, the Icelandic historian and poet Snorri Sturlusson, author of the historical work “The Circle of the Earth”, collected a book of ancient sagas telling about the same events.

Snorri Sturlusson’s sagas were called “The Younger Edda”. The Norse gods, or otherwise aces, in both “Eddas” are declared to be real people, the ancestors of the Scandinavians. Snorri wrote, “The country in Asia to the east of Tanaquisl (Don) is called the Land of the Aces, or the Abode of the Aces, and the capital of the country was called Asgard. The ruler there was one who was called Odin.”

According to V.I.Sherbakov, it is the cult center of Nusay that is described in the Edda as the city of the Asgard gods of the Aces. The Aces left Asia because of the expansion of Rome, but this whole story confirms the metahistorical connections of Asia and Europe. Researchers believe that the famous ivory rhyton vessels found in Nusay, decorated with relief friezes, depict not Greek gods, but rather Aces – Odin, Thor, goddesses, engaged in exactly what they do in the “Edda”.

A sculptural image of the head of a Parthian warrior, which can be seen in the State Museum of Turkmenistan, is part of the clay sculpture of Odin. This hypothesis is supported by the historical name of the city – Askhabad, where the first part points at the Aces, and “abad” – the traditional ending for the names of cities in Iran and Central Asia.

As it is known, this was the name of the first settlement and fortification built by the Russians in 1869. In 1881-1919, this is the city of Askhabad, which officially passed to Russia under the Akhal Treaty with Persia on September 21, 1881.

Since this year, the official countdown of the city’s history has been conducted. In 1919-1927, it was named Poltoratsk – in honor of the revolutionary P. Poltoratsky (1888-1918), Chairman of the Council of National Economy of the Turkestan Republic. And since 1927, the Turkmen capital is called Ashgabat.