Robert Kocharian: The circumstances of the outcome of hostilities in  the zone of the Karabakh conflict should be established by the  investigation 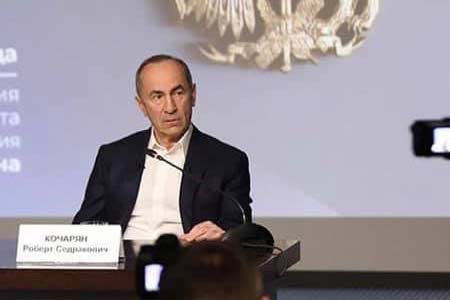 ArmInfo. The circumstances of the outcome of hostilities in the conflict zone around  Nagorno-Karabakh should be established by the investigation.

The second president of Armenia, Robert Kocharian, stated this on March 4  at a press conference by the Russian media.  "I have very serious  doubts. What is the motivation behind this, the investigating  authorities should investigate. We have reasonable assumptions that  something has gone wrong here," Kocharian said, reports TASS. He  added that in recent years the Armenian army was considered one of  the best in the South Caucasus by many military experts.

The situation in the conflict zone around Nagorno-Karabakh escalated  on September 27, 2020, and active hostilities began there. Baku and  Yerevan have disputed the ownership of the region since February  1988, when it announced its secession from the Azerbaijan SSR.

Russian President Vladimir Putin, Azerbaijani leader Ilham Aliyev and  Prime Minister of Armenia Nikol Pashinyan on November 9 signed a  joint statement on the complete cessation of hostilities in Karabakh.   According to document, the Azerbaijani and Armenian sides settled on  occupied positions, a number of areas came under the control of Baku,  and Russian peacekeepers were deployed along the line of contact and  the Lachin corridor. In Armenia, after the signing of the statement,  protests began with calls for Pashinyan's resignation. The opposition  made him responsible for the conditions on which he signed the  document.