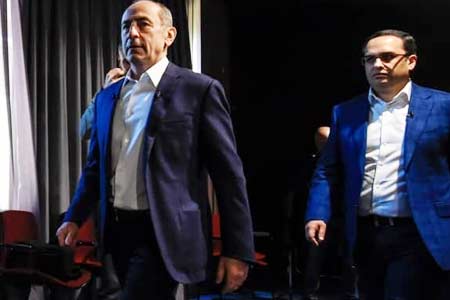 ArmInfo.The second president of Armenia, Robert Kocharian, does not plan to lead the  opposition movement in the near future. He stated this on Thursday at  a press conference by the Russian media.

"Today the opposition has developed a format that makes no sense to  change. It managed to consolidate around itself a noticeable part of  our society. I supported this format," Kocharian said, reports TASS.  He also noted that at the moment he does not plan to lead any party,  but he does not rule out this either.  Kocharian noted that he  supports the format of the opposition movement and Vazgen Manukyan as  its leader.

"I support the format created by the opposition movement, and I don't  think that it needs to be revised.  Vazgen Manukyan is a worthy man,  and he is ready to take on a mission for a year if everything goes  according to the opposition's plan and he heads the interim  government. burden in this situation, "Kocharian said.

"If there are extraordinary elections, I will participate. I think I  have enough experience. Do I'm sure in my victory? At least I haven't  lost yet in the election," said Kocharyan, reports TASS.

It should be noted that against the background of the political  crisis in the republic, which has been developing since November last  year, the opposition Movement for the Saving of the Motherland, which  united more than a dozen parties, proclaimed Manukyan as its  candidate for prime minister to form an interim government, in case  the current head of the Cabinet, Nikol Pashinyan, leaves. resign.  On  Wednesday, the Investigative Committee of Armenia opened a criminal  case against Manukyan under the article of the Criminal Code on calls  for seizing power and forcibly changing the constitutional order.  He  could face up to three years in prison. The politician himself noted  that he considers the initiation of the case politically motivated.