Member of the Armenian Parliament to the head of SJS: We will come  for you 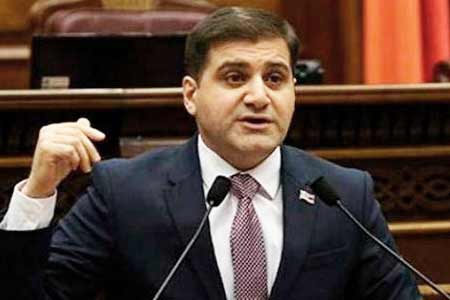 ArmInfo."I warn you, do not dare to dance near the devil", - said on March 4  at the session of the RA National Assembly, independent MP Arman Babajanyan, commenting  on his yesterday's polemic with the Chairman of the Supreme Judicial  Council Ruben Vardazaryan.

The deputy saw in yesterday's statements by the head of the ARIA  threats against him. "Do not take me to fear, 2.5 years ago, being in  captive, I sat with thieves in law and criminal authorities,  "Babajanyan said.  He also stressed that everyone knows who  patronizes the current composition of the judicial system. "So sit  still and go about your business, we will come for you, "the deputy  threatened.

In turn, the Chairman of the National Assembly of the Republic of  Armenia Ararat Mirzoyan noted that if the deputy saw threats against  him in Ruben Vardazaryan's speeches, he can send a message to the  relevant structures.

It should be reminded that on the eve of the plenary session of the  National Assembly of Armenia, debates unfolded around the chairman of  the Supreme Judicial Council Ruben Vardazaryan and his statement of  November 15, 2020. In his statement, Vardazaryan urged judges not to  succumb to pressure from political circles. The statement coincided  with a court hearing on the arrest of the former director of the NSS  and Vardazarian's longtime friend, ex-head of the NSS Artur  Vanetsyan. Recalling this statement, on the eve of the NA deputy  Arman Babajanyan stated that by this appeal the head of the ARIA did  not even suspect what he had "gotten himself into". He noted that  everyone knows who exactly brought Vardazaryan to the Supreme  Judicial Council. In response, the Chairman of the Supreme Judicial  Council stated that he intends to apply to the Ethics Commission or  the Parliamentary Council in order to bring Arman Babajanyan to  disciplinary responsibility. "From the moment when I stop being a  judge, I will answer you in your own words and even more sharply,"  Vardazaryan said.

It should be noted that the candidacy of a judge of the Court of  Cassation is discussed at the plenary session of the RA National  Assembly on March 4. The Supreme Judicial Council has nominated  Samvel Grigoryan, Armen Haykyants and Arsen Mkrtchyan were nominated  for the position of one of the judges of the Court of Cassation.   However, Samvel Grigoryan recused himself the day before.