Zalkaliani: Tbilisi can become a "kind of platform" for Azerbaijan  and Armenia for cooperation in economic projects 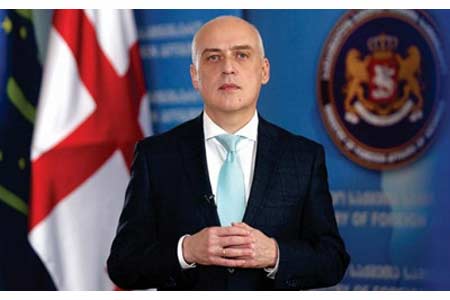 ArmInfo. Georgian Foreign Minister David Zalkaliani, at a meeting with his Turkish counterpart Mevlut Cavusoglu, during his visit to Ankara, along with other  issues, discussed the proposed <3 + 3> format for cooperation in the  Caucasus, which provides for the participation of Georgia,  Azerbaijan, Armenia, Turkey, Iran and Russia .

At a joint press conference after the meeting, the Georgian Foreign  Minister said that although Georgia is grateful to Turkey for the  initiative to ensure "long-term" peace in the region, it has a  "clear" position on Russia's participation in this format.

"For us, unification in formats means that the participating  countries must respect the fundamental principles of international  law, including the recognition of the sovereignty and territorial  integrity of countries", - said Zalkaliani, Civil.ge reports.

According to him, it is difficult for Georgia to imagine  participation in any international format together with Russia for  the development of economic cooperation until steps are taken for  de-occupation.  Instead, the Georgian Foreign Minister proposed that  Tbilisi become a "kind of platform" for Azerbaijan and Armenia, where  they could cooperate on projects in the field of economy, business,  culture and relations between peoples.

The Turkish Foreign Minister, in turn, said that Turkey respects and  understands "Georgia's cautious approach to this issue." "When  difficult circumstances exist, I mean Abkhazia and South Ossetia, it  may be difficult to start bilateral negotiations (with Russia), but  it would be easier to do it in a multilateral format," he said.

Mevlut Cavusoglu said that Turkey supports the territorial integrity  of Georgia, as well as Azerbaijan.  At the meeting, the ministers  discussed strengthening the strategic partnership between the two  countries, bilateral trade and economic relations, assistance in  combating the pandemic, as well as energy projects with Azerbaijan,  including the TANAP projects and the Baku-Tbilisi-Ceyhan oil  pipeline.