Manukyan: The Constitutional Court is the last instance where the issue on dismissal of Chief of General Staff will be decided 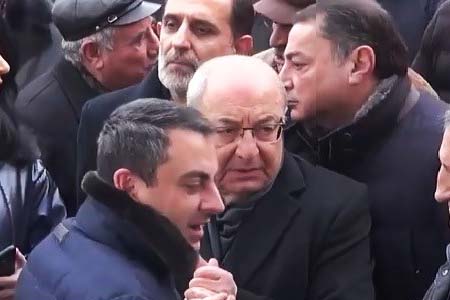 ArmInfo. The Constitutional Court is the last instance where the issue related to the dismissal of the Chief of the General Staff of Armenia Onik Gasparyan will be decided.  Vazgen Manukyan, a single candidate for prime minister from the opposition, said this in an interview with journalists on Baghramyan Avenue, where the rally of the Salvation of the Motherland Movement is starting at these minutes, adding that they spoke about this at a meeting with RA President Armen Sarkissian today.

"Nevertheless, if, the Prime Minister of the Republic of Armenia Nikol Pashinyan, in violation of the law, still signs the decision on dismissing Gasparyan, then, according to my information, the army will not obey this decision. Gasparyan is a decent person, this is not a struggle for a seat. The future of the army is being defined, "says Manukyan, who is convinced that if Gasparyan obeys, then with his departure, all the persons who signed this document will be removed.

He also believes that if Gasparyan is forced to leave, it will mean that the President of Armenia is "breaking the army."

Clarifying whether pressure was exerted on the RA President on this issue, Manukyan noted that, according to his inner conviction, yes, but he had no information about it.

Meanwhile, when asked to assess whether the authorities today can go to any action or provocation against the demonstrators, given the number of internal troops near parliament building, Manukyan expressed the conviction that no. "But if it happens, then war is a war ", - concluded the candidate for prime minister.

To note, today a questions and answers meeting with the government is planned at the National Assembly.  The Prime Minister of the Republic of Armenia is to come to the parliament. A large number of police officers have been drawn to the parliament. The streets of Demirchyan and Proshyan are closed by law enforcement officers, in the courtyard of the National Assembly there are many security officials, including those wearing masks. Also, light and sound grenades were seen in the territory of the parliament.  Let us also note that today the Armenian police issued a statement in which they warned of possible provocation, urging citizens to observe law and order.