In the coming hours, the President of Armenia will announce his  decision on the case of the Chief of the General Staff of the Armed  Forces 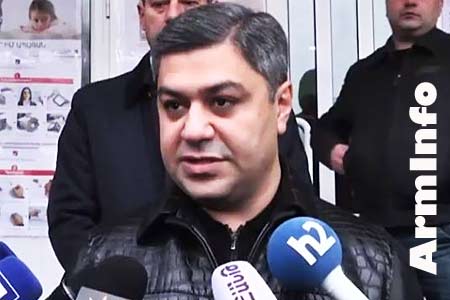 ArmInfo. In the next few  hours, Armenian President Armen Sarkissian will announce his decision  on the case of Onik Gasparyan, Chief of the General Staff of the  Armed Forces of the country. On March 3, Artur Vanetsyan, the former  head of the National Security Service, leader of the Rodina party, a  member of the Movement to Save the Motherland, told reporters about  this.

Artur Vaanetsyan noted that only one issue was discussed at the  meeting - the sending by the RA President of an inquiry on the  constitutionality of the law "On Military Service and the Status of  Servicemen" in relation to Onik Gasparyan. Armen Sargsyan, according  to the ex-head of the National Security Service, has listened to the  arguments of the representatives of the Movement and will make a  corresponding statement in the next few hours.

As ArmInfo previously reported, on March 2, the President of Armenia  announced that he would not sign the draft decree on the dismissal of  Onik Gasparyan, and guided by paragraph 4 of Part 1 of Article 169 of  the Constitution, the President of the Republic will make a separate  statement to the Constitutional Court with a request to resolve the  issue of compliance with the Constitution of the RA Law. military  service and the status of a soldier> dated November 15, 2017.

Note that the reason for the dismissal of the Chief of the General  Staff of Armenia was a collective statement made by the leadership of  the Armenian Armed Forces demanding the resignation of the current RA  Prime Minister. The statement of the military on February 25  emphasized the imperative of Pashinyan's departure, which, according  to them, poses a threat to the national security of Armenia.