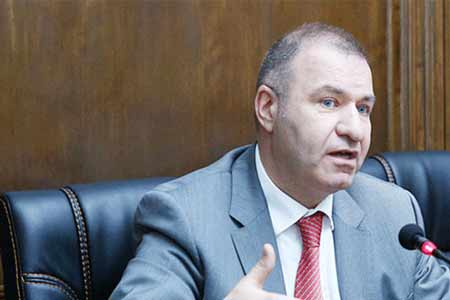 ArmInfo.The military "Iskanders" have turned into political "Iskanders" in Armenia. On March 2, MP from the Prosperous Armenia opposition faction Mikael  Melkumyan stated this from the rostrum of the RA National Assembly.

In his words, today Armenia do not know how to respond to the  requests of a strategic partner in the person of Russia. There is  also no answer to the silence of the country's authorities to the  statements of Ilham Aliyev. And if after the statement of a  high-ranking official it turns out that his statements about Iskander  are a misunderstanding, this, in fact, means an attempt to drive a  wedge into Armenian-Russian relations. "I am very interested who was  the one who misled the high-ranking official, and where is the  guarantee that the these misunderstandings will not continue?" Mikael  Melkumyan said.  It should be reminded that the statement of the  Prime Minister of the Republic of Armenia Nikol Pashinyan about the  "unexploded" or "exploded by 10%" missiles of the "Iskander"  complexes in the arsenal of the Armenian army was based on an  incorrect information he had. According to the politician's  Spokesperson, the situation was clarified during a telephone  conversation between the President of Russia and the Prime Minister  of Armenia. Commenting on the message, Dmitry Peskov stressed the  importance of restoring the truth in this matter. A political crisis  continues in Armenia, provoked by Pashinyan's statement about the  "Iskander" and the subsequent dismissal of the country's deputy chief  of staff. On March 1, the Prime Minister met with the President of  the country Armen Sargkissian, who earlier refused to satisfy his  request for the resignation of the head of the General Staff Onik  Gasparyan.

On February 23, in an interview with 1in.am, Nikol Pashinyan made a  resonant statement that provoked a new round of the political crisis  in Armenia. Answering the absentee question of the country's former  President Serzh Sargsyan why during the recent aggravation of the  Nagorno-Karabakh conflict, the Armenian army did not use Iskander at  the early stage of the clashes, the Prime Minister mentioned Russian  "unexploded" or "10% detonated" missiles operational-tactical  complexes. In response to a request from journalists to comment on  this statement, the First Deputy Chief of the General Staff of the  Armenian Armed Forces, Tiran Khachatryan, said that this could not  happen: "This is not serious, it is impossible." On the evening of  February 24, President Armen Sarkissian dismissed the Lieutenant  General on the proposal of Nikol Pashinyan.