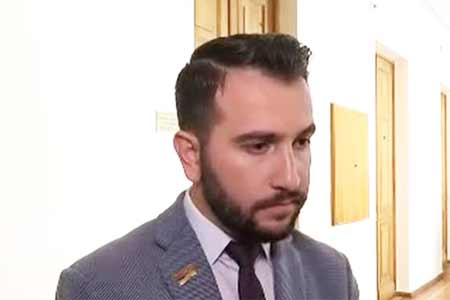 ArmInfo.The Armenian delegation was the most active at the winter session of the  Parliamentary Assembly of the Organization for Security and  Cooperation in Europe (OSCE PA). Hayk Konjoryan, the head of the  Armenian delegation of the OSCE PA stated this during a press  conference on March 2.

In particular, he noted that in general, Armenia held 8 speeches  within the framework of the winter session, 7 of which were from the  parliamentarians of the "Civil Agreement", and 1 - from the  "Enlightened Armenia".

“The issues related to the Armenian prisoners, the artificial delay  in the process of their return by the Azerbaijani side, the cruel  treatment of them, the military aggression of Azerbaijan in the  direction of Khtsaberd after the signing of the trilateral ceasefire  statement ran through our speeches. They talked about the involvement  of foreign militants, the determination of the status of Artsakh and  the right of the Artsakh people to self-determination, ”he said,  noting that this session of the OSCE PA was timed to coincide with  the coronavirus and its consequences.

He said that on the first day he had 3 speeches, which resulted in  heated discussions with the Azerbaijani and Turkish delegations.

As a result of the speech of the Armenian delegation, Konjoryan said  that representatives of delegations from other countries, in  particular Belgium and Sweden, began to speak about the need to  return the Armenian prisoners. "The Minister of Foreign Affairs of  Sweden, which is also the OSCE Chairperson, Ann Linde noted that we  are far from resolving the Karabakh conflict, stressing that this  issue can be resolved exclusively through the negotiation process  within the framework of the OSCE Minsk Group format," he said, noting  that the opposite opinion was expressed by representatives of the  Azerbaijani and Turkish delegations.

During the press conference, representatives of the Armenian mission  noted that efforts in working with the international community should  be continuous so that Azerbaijan fulfills its obligations as soon as  possible, primarily related to the return of Armenian prisoners to  their homes.