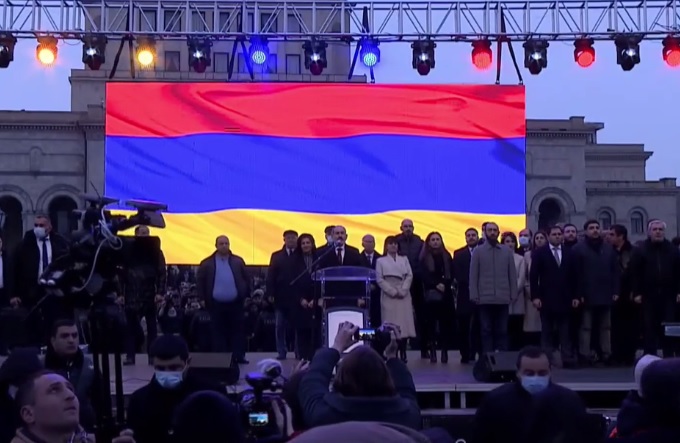 ArmInfo.The rally organized by the Prime Minister of the Republic of Armenia Nikol Pashinyan on the Republic Square started with a minute of silence for the heroes who  died in the course of the large-scale military aggression of  Azerbaijan against Artsakh.

Then a minute of silence was paid to the memory of the victims of March 1, 2008.  Then, in his welcoming speech, the prime minister stated that the country is going through difficult times today, but at the same time urged to fill the first  day of spring with optimism and victory.  He also noted that he is  sure later there will be a lot of speculation on the topic that the  authorities used the administrative resource, and many people from  different regions were brought to this square. However, according to  him, the only answer to this will be the spirit of unity that is  present in this square.  Pashinyan also stated that for 13 years in  Armenia, events have been held in memory of the victims of March 1,  2008. "Today we are holding this event in completely different  realities - the grave consequences of the second Karabakh war, many  victims and prisoners, the continuing propaganda of violence,  attempts to involve the Armed Forces in political processes have  posed new challenges for us. Managing these challenges depends on the  future of our country and people. Now we are approaching the point  when opportunities for error are running out, "Pashinyan said, adding  that there have been serious mistakes both over the past three  decades and under his government. In this regard, he asked  forgiveness from all RA citizens for their mistakes.

Speaking about the mistakes made by his government, Pashinyan  expressed his conviction that one of the main reasons was that they  were too loved by the people and, in search of ideal solutions for  the people, they often did not act, and as a result, they had to  choose between the worse and the worst options. ...

At the same time, he promised to correct all the mistakes made and  build a prosperous Armenia.  Pashinyan noted that there were  certainly omissions, but there were also achievements and the main  thing is to prevent devaluation of these achievements. According to  him, their most important achievement was that the power in this  country belongs to the people and this should remain unchanged. "They  want to take power away from the people. But we came here to say that  we will not allow this. We will not allow this achievement to be  destroyed. Power in Armenia will remain the highest value in  Armenia," the Armenian Prime Minister said, adding that it does not  matter who is on this square, he will have to be elected by the  people.

Speaking about the events of March 1, 2008, he noted that the then  authorities directed the army against the people. "It is very  important that there are people in front of the court in the March 1  case. And yes, I would like to say that, according to my assessment,  the March 1 case was solved. Despite the fact that the shooters were  not identified, the background on which these murders were organized  was revealed. You will see this during the trial, "the Armenian Prime  Minister assured.

Pashinyan accused the then authorities of concealing and destroying  evidence in the March 1 case.

The Prime Minister also said that the forces that organized the March  1 events are still trying to raise the army against the people. " I  cannot give other assessment to the statement of the General Staff of  Armenia.  They want to send the army against the people," Pashinyan  said, adding that among these people is the third President of the  Republic of Armenia Serzh Sargsyan, who has authority and influence  in a number of circles among the military.

The head of the government also called the statement of the RA  General Staff illegal and stressed that the General Staff thus took  an oppositional position, thereby violating the RA Constitution on  the inadmissibility of the army's involvement in internal political  processes.

The RA Prime Minister also assured that in 2018 his party stopped the  involvement of the army in the velvet revolution, stating that the  army and the Armed Forces should be apolitical.  "And today the  political forces known to you are trying to induce the army to bring  tanks against its own people. But this will not happen. Moreover,  Gasparyan's statement makes his dismissal from the post of Chief of  the RA General Staff inevitable," he said, accusing Gasparyan of  taking steps by Serzh Sargsyan 's instruction.

At the same time, the prime minister assured that there will be no  political vendetta in Armenia.  Pashinyan also accused Onik Gasparyan  of treason. "I appointed him to the post, I cannot qualify his  actions in any other way as a betrayal. Onik Gasparyan must leave,  and the rest of the signatories must return to their work," the prime  minister added.

Speaking about further activities, the Prime Minister recalled the  statement of the Armenian Security Council and noted that he again  sent the draft decision on the dismissal of Gasparyan to the RA  President.  Pashinyan expressed hope that the RA President will make  a decision that will proceed from the stability and security of  Armenia.

The head of government promised to amend the Constitution of Armenia  and announced a possible transition to a semi-presidential form of  government.

"If the parliamentary forces accept our formed proposal to hold early  elections, we will agree to hold these elections, because we are  convinced that the people are able to form the legitimate government  in this country. I challenge the opposition, let's go to the  elections and see who the people elect ", - said Pashinyan, adding  that the elections pursue one goal, and the authorities will not seek  victory in these elections.  At the end of his speech, he also  touched upon the issue of prisoners of war, noting that he did not  consider it advisable to make this issue public, and the events of  the past week created a number of problems, however, the authorities  will do everything to return all prisoners.

Then, the RA Prime Minister called for the march along the route  Mashtots Avenue - st. Koryun-st.  Abovyan - laying flowers at the  monument to Myasnikyan.

To note, the rally of the authorities is quite crowded, but the  square is not full. Note, also, that a large number of law  enforcement officers are gathered on the square.